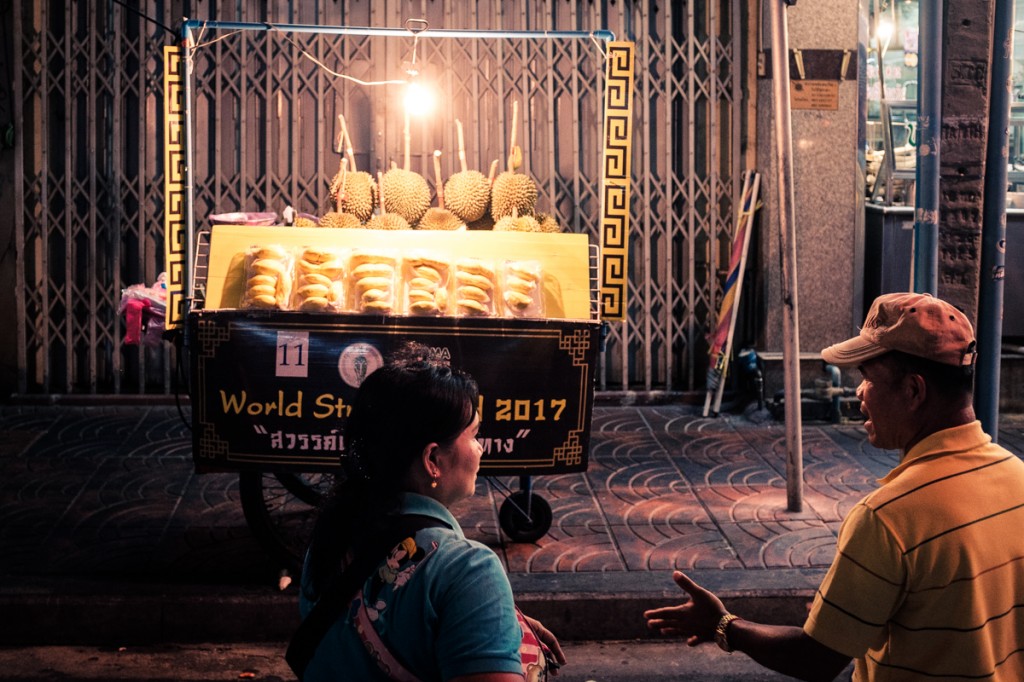 I know I write a lot about the smell of Durian, but those who have never been subjected to its sickly sweet odour just cannot understand how much Durian stinks for us non Asians. So sitting on a bench in front of a durian stand to chat, that seems just insane to me! 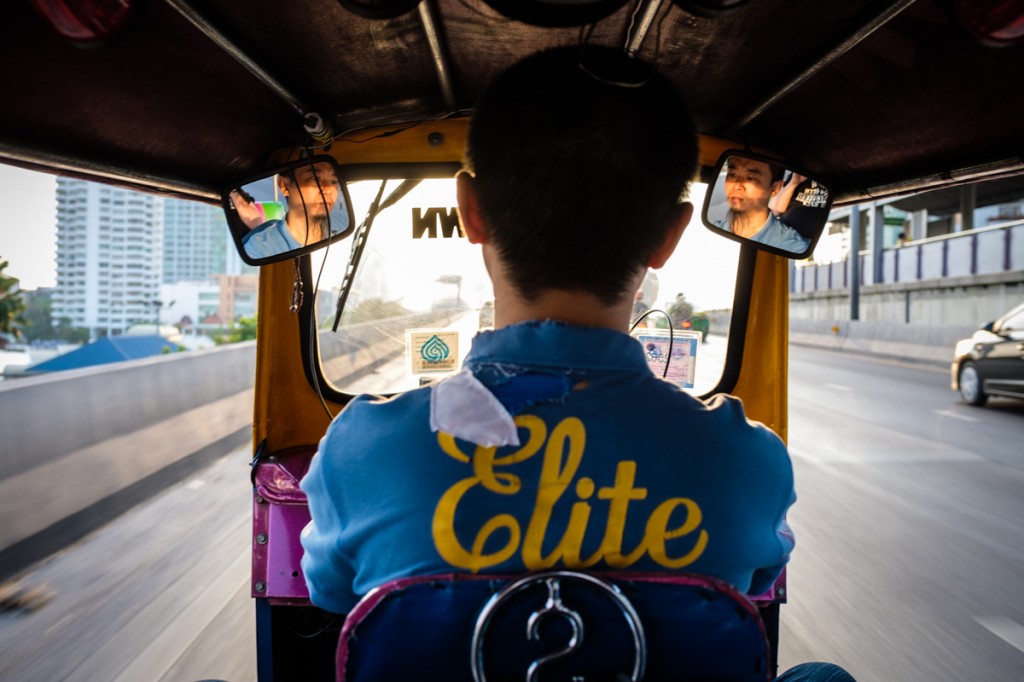 I love tuk-tuks. Sure, it can be a bit scary at times, but you experience the hustle and bustle of the city so much more vividly in a tuk-tuk. I often take photos from the side, most of them wasted because we’re moving too fast. I also try to frame the drivers in their mirrors, and last time I was in Bangkok I got a nice one (I thought) driving into the sunset. 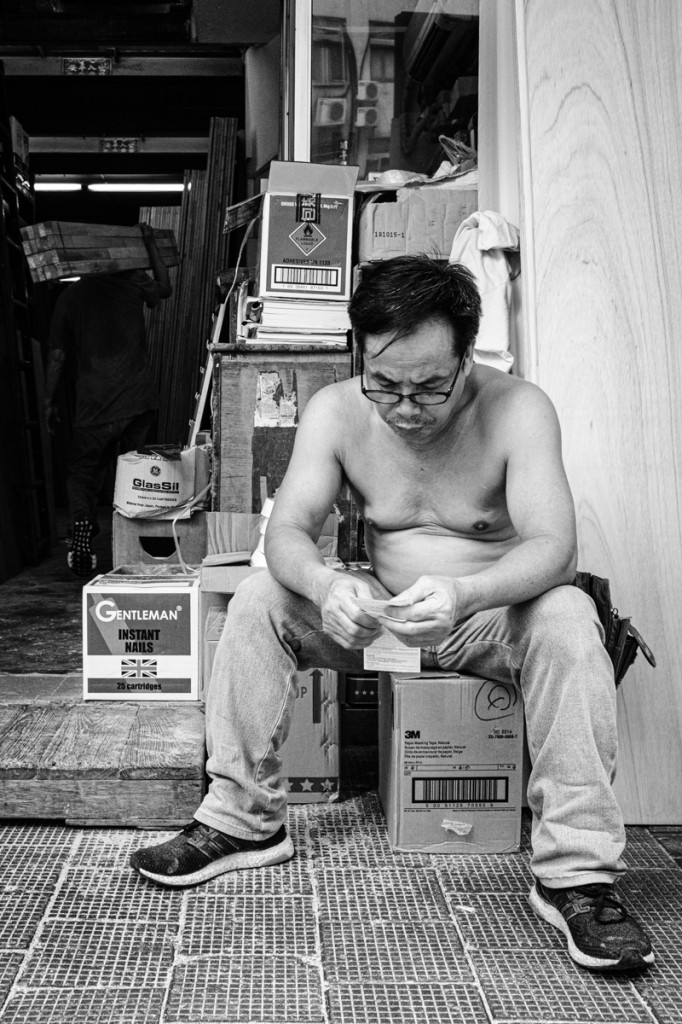 You know by now that I find the barechested men in Hong Kong (and elsewhere in China) interesting subjects. Usually however, when they’re not working, they’re checking their phones. Not this guy ! 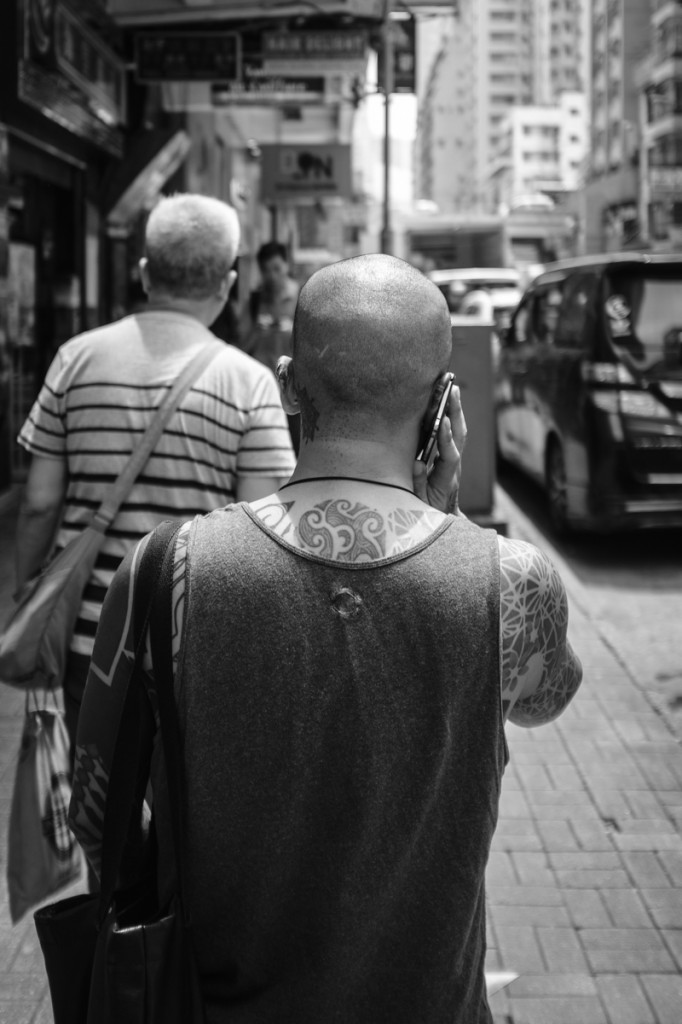 Lots of tattooed people here in Hong Kong. I’ve been trying to get a shot of this type for a while. I kind of wish the other person hadn’t been so near, but I think it works nonetheless. 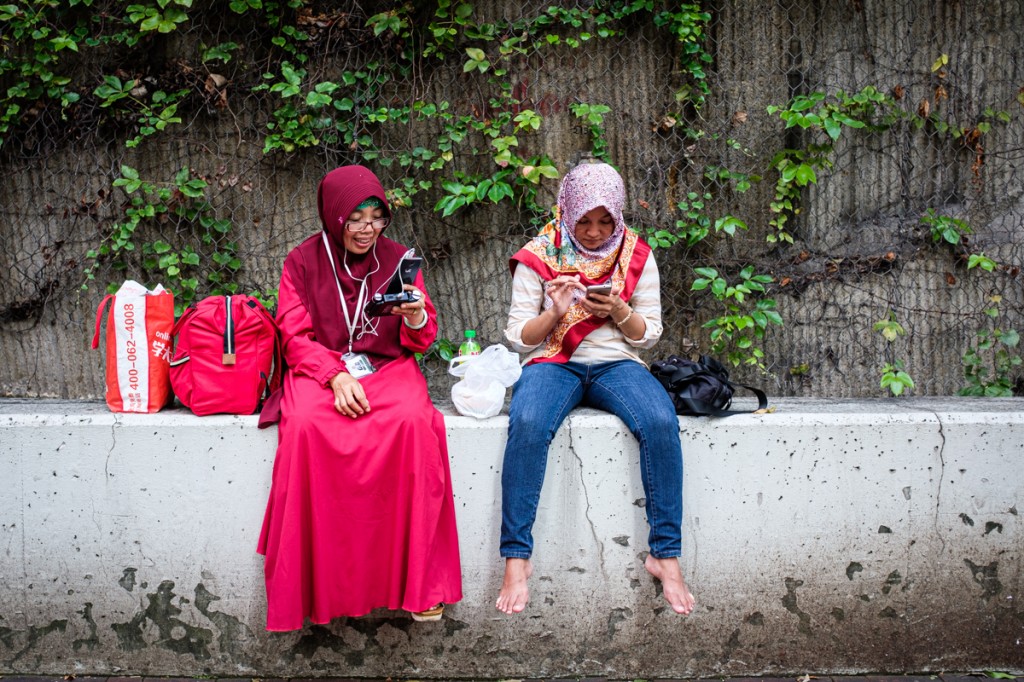 On sundays, Victoria Park and the surrounding areas are filled with Indonesian helpers getting together. It’s their day off, they get together, eat food they prepared for each other, play music, sing prayers. It’s both colourful and moving. But with the Black March yesterday, their usual meeting grounds were teeming with people. I imagine many of them stayed home, or met elsewhere, but still a few of these Indonesian helpers were to be seen alongside the roads where the protestors marched. I nabbed this quick shot because I loved the smiles on their faces and the bare feet. 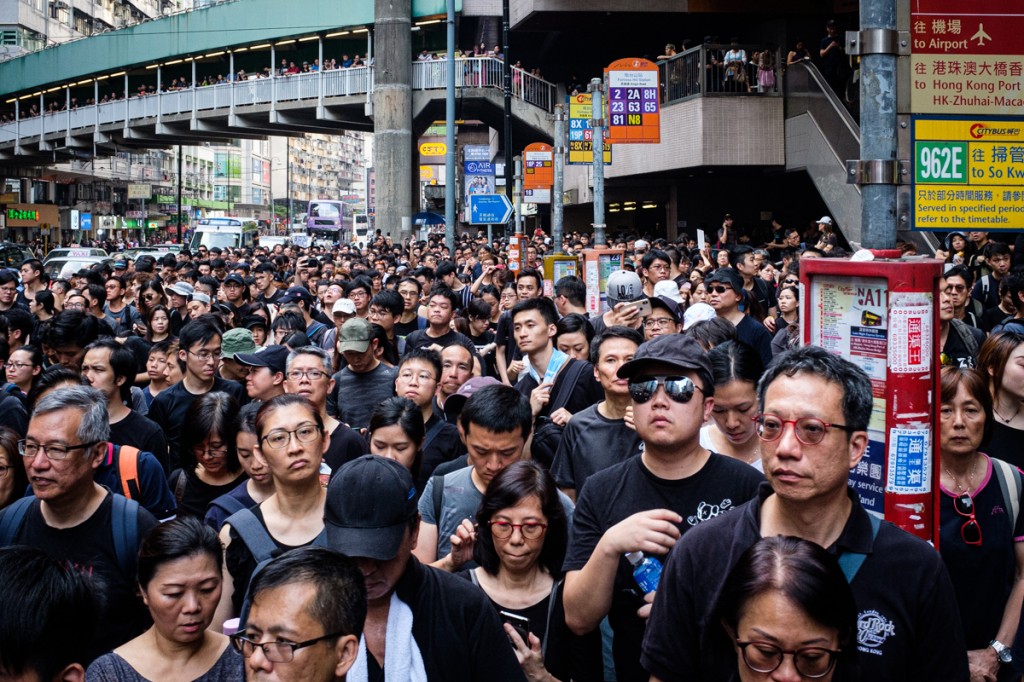 Today, for the third time in a week, Hong Kong is in the streets. Last Sunday, over 1m people walked peacefully to the LegCo (the seat of the HK government) in opposition of a proposed law enabling Chinese authorities to extradite anyone to be tried in China. Last Wednesday, when the law was supposed to be debated, another walk was savagely repressed, causing one death and shocking those who walked as well as those who didn’t. The law was postponed yesterday, but today a third march (apparently peaceful from what I could see) was maintained. I didn’t do the whole walk but was in the middle of the crowd for a while. This is not a fantastic shot, but it’s a tribute to the brave citizens who made their will known. 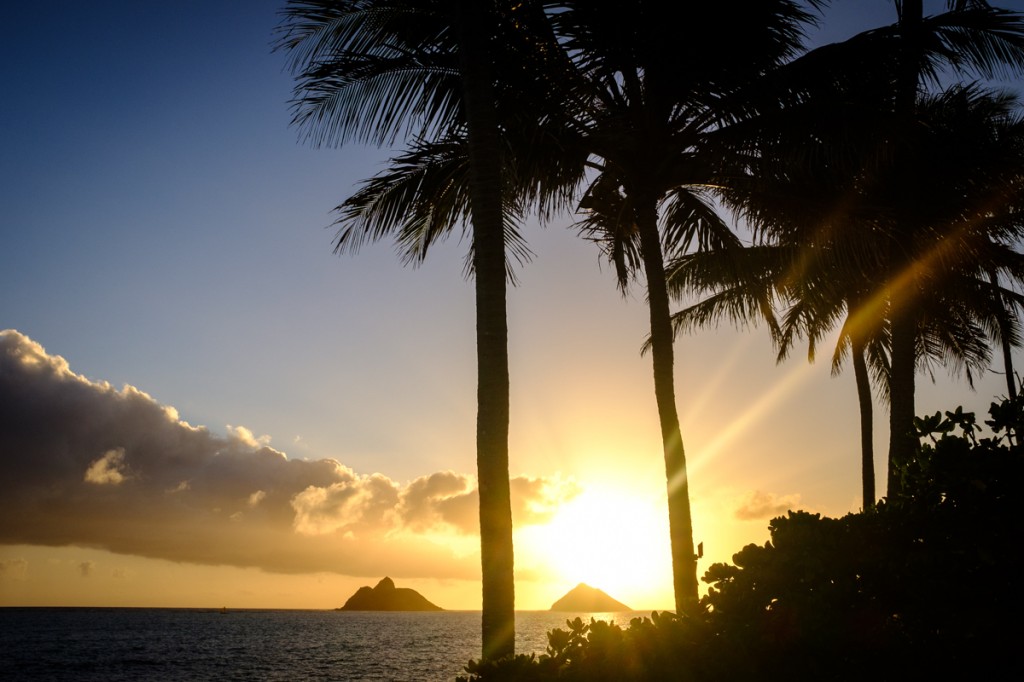 A good sunrise in Hawaii is worth a lot of sunrises elsewhere. I only saw a few of these, but boy were they impressive. This one, from Lanikai Beach was particularly stunning and I nearly missed it, because at beach level you couldn’t see the sun on the horizon… 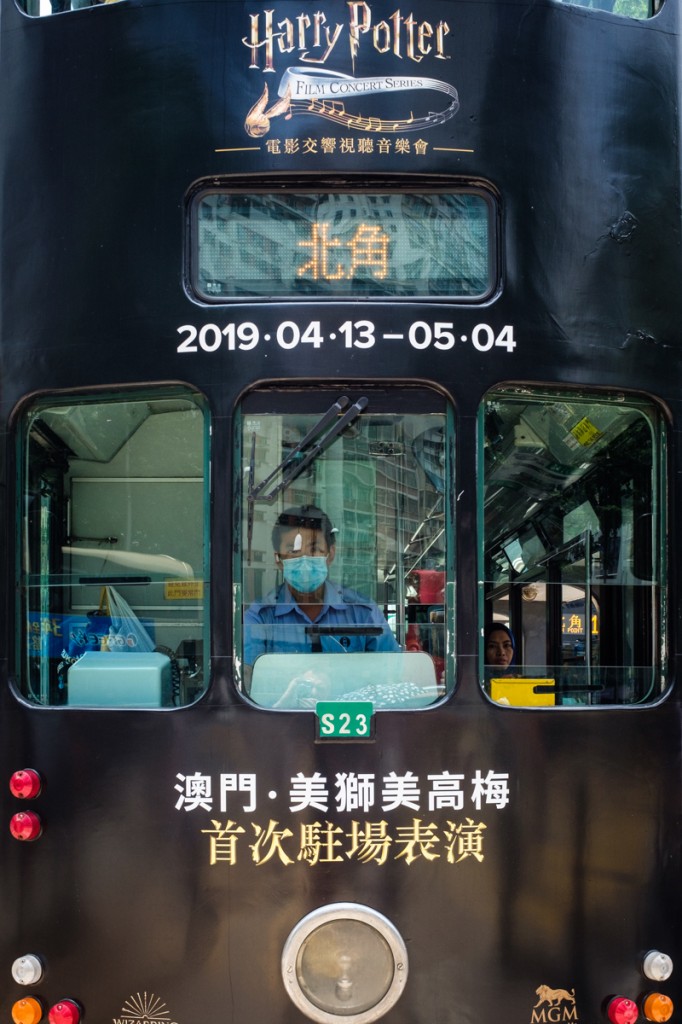 Hong Kong trams are often decorated with painted adverts for various cosmetics, luxury goods or real estate deals. With this one I didn’t pay attention before I shot, I was just interested in the driver and his mask. So I only noticed later that it was labelled Harry Potter! 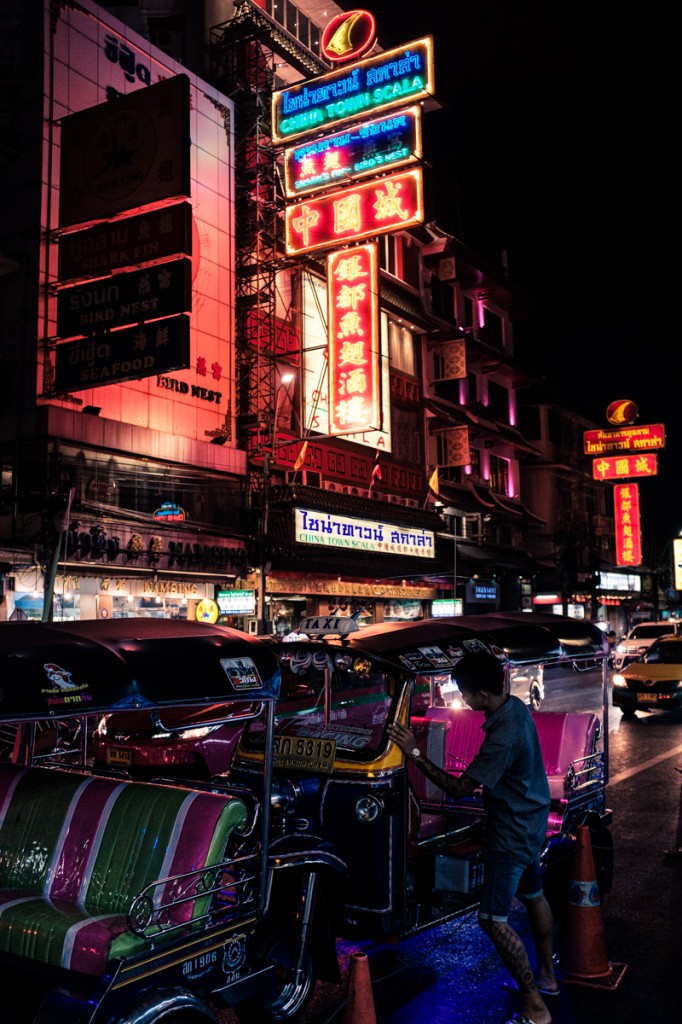 Yaowarat Rd. in Bangkok is the heart of Chinatown, although it looks very, very Thai. At night there’s tons of street food to be found and amazing neon lights. Because it’s touristy, there are also a lot of tuk-tuks waiting for clients. I loved everything about the place. 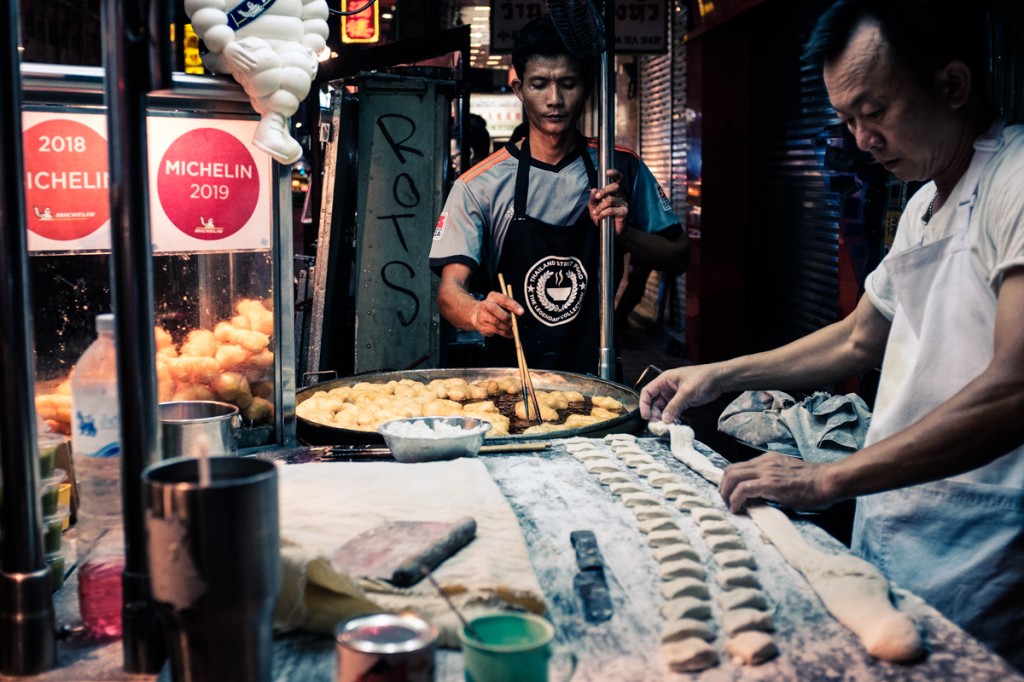 Walking down Yaowarat Rd. at night I saw so many stalls with Michelin endorsements that it was downright suspicious. Don’t get me wrong, the food in question was very appetizing most of the time, but I somehow don’t think Michelin would award so many street food stalls. Or am I wrong?