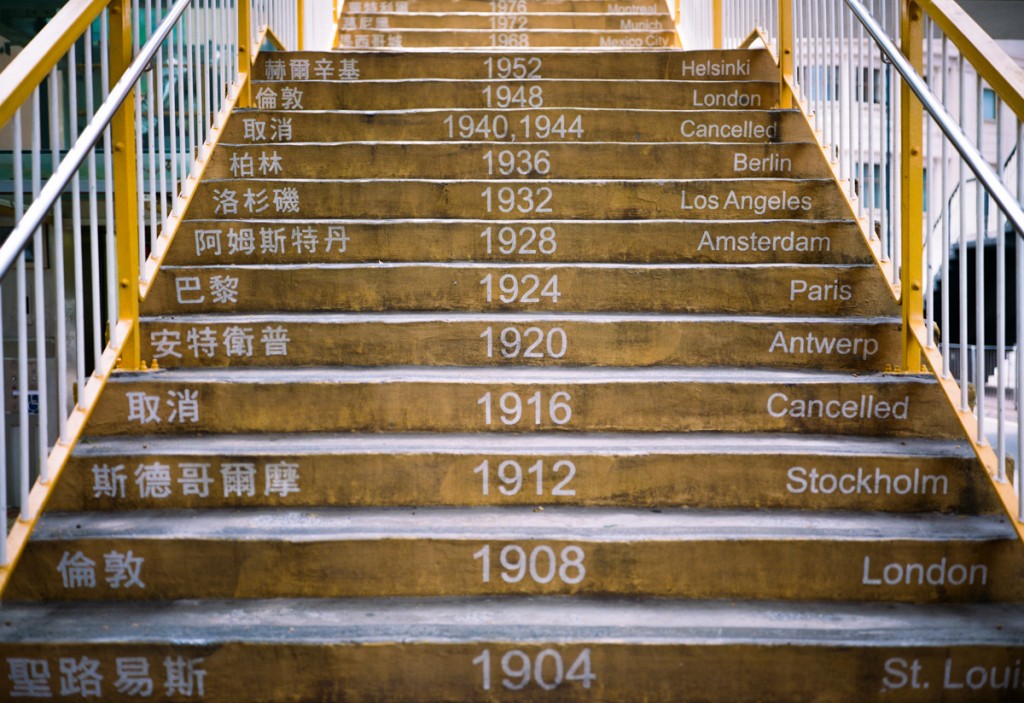 A few weeks ago I became aware that the Fuji GW690iii camera was both highly rated and comparatively affordable. When looking at entering Medium Format, that is not a given (to say the least). I had a pending birthday present from my wife, so I went out and got this beast of a camera. It shoots huge 6x9cm negatives. I proceeded to walk around Hong Kong and give the camera a trial run. This is the Olympic Stairs in Causeway Bay, where each step marks where an Olympiad happened. It’s a place I really like, close to where we first lived in Hong Kong. I love the amount of detail as well as the subtle drop off in depth of field.

On Monday I shared a photo of Victoria Harbour as seen from TST. Here is another one, shot virtually in the same place twenty minutes later. Night falls really fast here in Hong Kong, and the building were starting to light up in this one. The ferris wheel in particular is a nice sight, especially since this was only a few seconds of exposure. Not knowing Crossbird’s reciprocity failure, I winged it, and while this is clearly a little underexposed, it allowed me to capture the last of the orange glow from the sunset. A happy accident as we say in film photography circles.

I tried several compositions with those taxi car doors. This one gave me the deepest perspective, and I really like the clash between the bright reds of the doors and the bright green of the crossprocessing in the shadows.

I really liked those roadsigns when I stumbled upon them. It was somewhere around 12s of exposure if I recall (with no information on Crossbird reciprocity failure, it was a bit of a guessing game) and I love the way it turned out. My wife says it could be anywhere in the world, but I think it’s got a Hong Kong vibe. 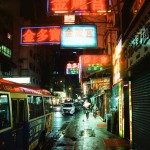 My first contact with Cinestill 800T was thanks to a nighttime photowalk in Mong Kok organised by Camera Film Photo in collaboration with Take Kayo (@bigheadtaco on Instagram). I shot two rolls on my Canon A2 during that outing, and really loved the results. The neon lights were magnified by the tungsten rendering and for [...]

There a tiny backalley in Tai Hang where you can find a garage that caters exclusively to Taxis. Because of space constraints, they stock spare parts in the street, which means that when you wander around there, you can see the characteristic read (and occasionally green) car doors, boot doors and bonnets. I’ve repeatedly taken photos in that backalley, but this one at night is one of my favourite.

My mood of late has been with trying lots of different film stocks I have never tried before. Rollei Crossbird is an E6 (slide) stock that gives some cold tones when processed with C41 instead of E6, so I wanted to give it a shot. It turned out way grainier than I anticipated for a 200 ISO stock, but I really like the results. I love it that the tip of the Central waterfront is still bathed in orange sunlight, and gradually as things get more shady they get greener. 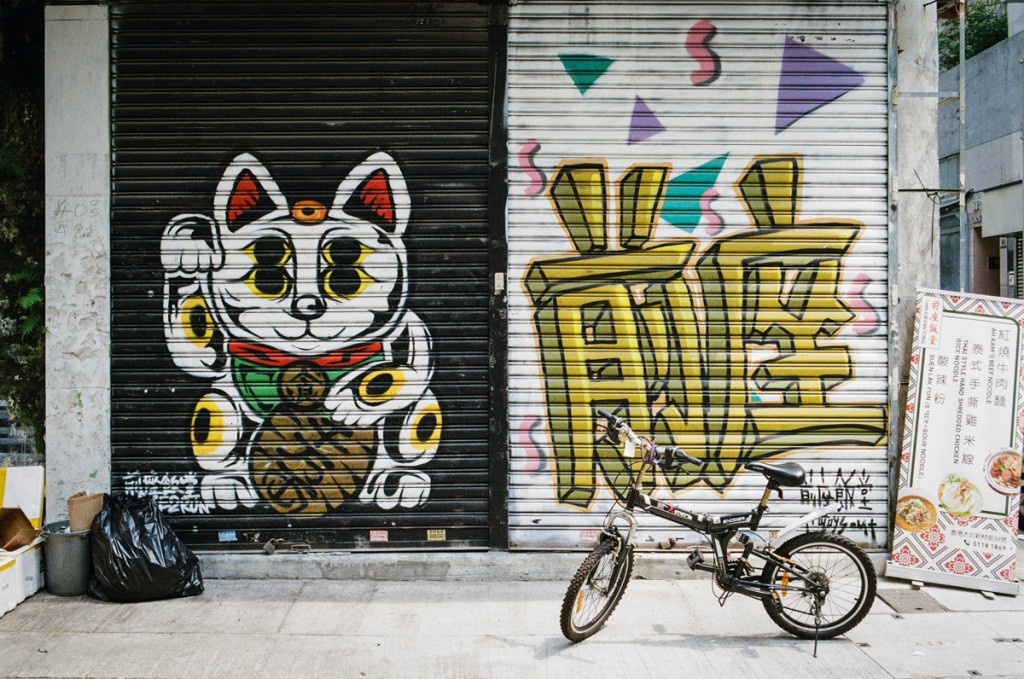 There’s a little bit of street art in Tai Hang. Not a huge amount, but what there is is quite nice. This store screen is my favourite. It makes me smile each time I walk past it, and for some reason there is nearly always a bicycle parked in front (I can’t guarantee it’s the same one each time…) 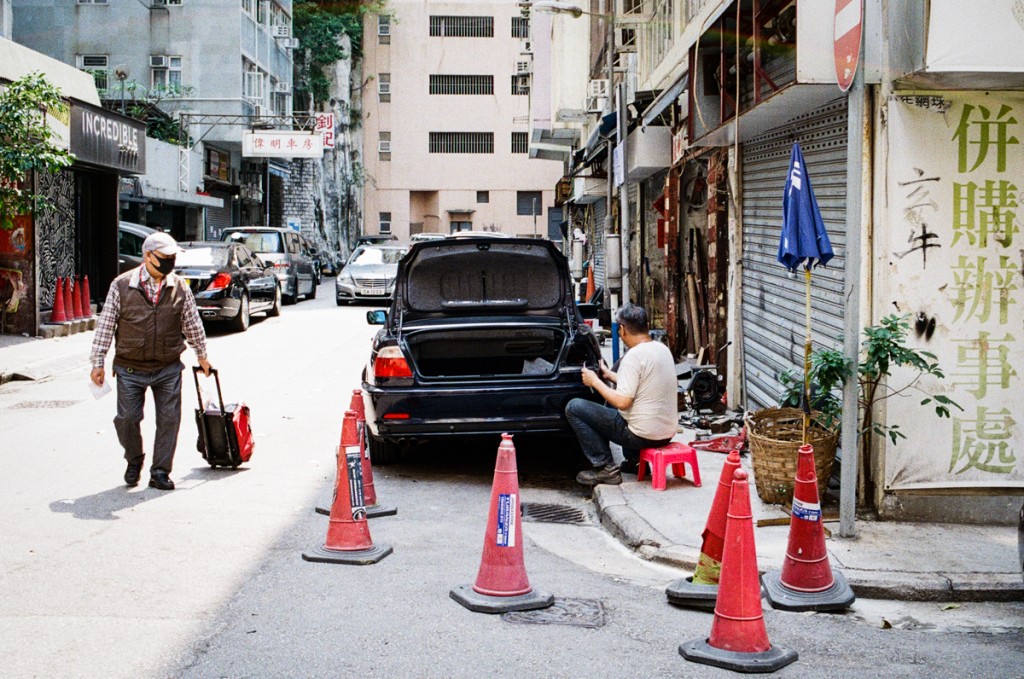 Another example of a car being repaired on the streets. I like this one because of the cones, and because the guy with his suitcase gives the entire composition some motion. 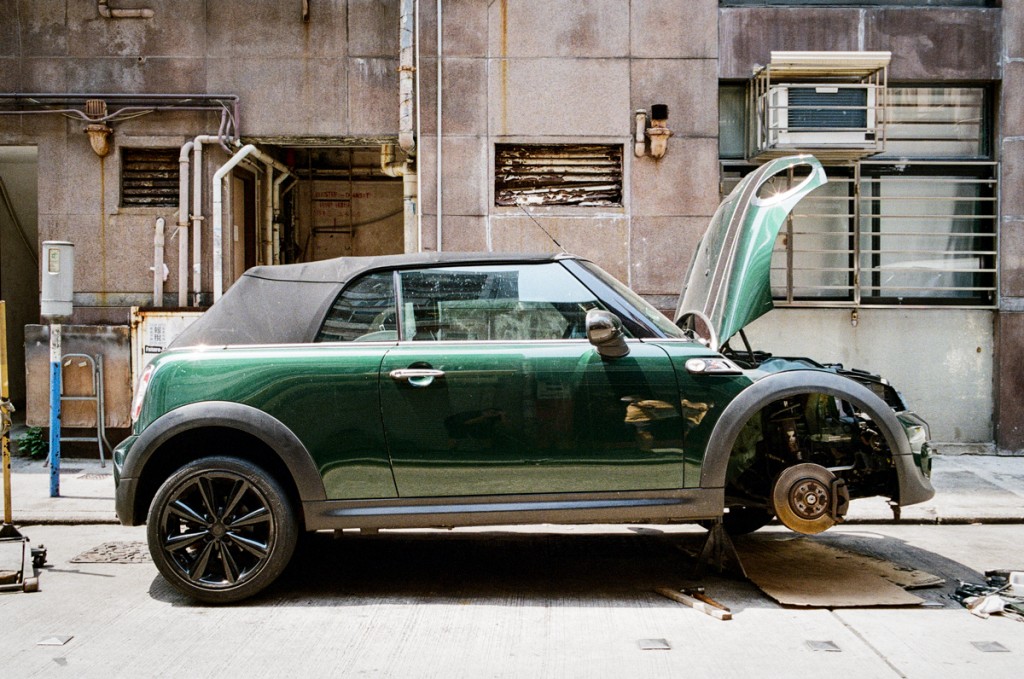 With space at a premium on Hong Kong Island, most car repair shops actually repair the cars on the street. It’s one of the fun sights of Tai Hang. This Mini without its front wheels was really cute…