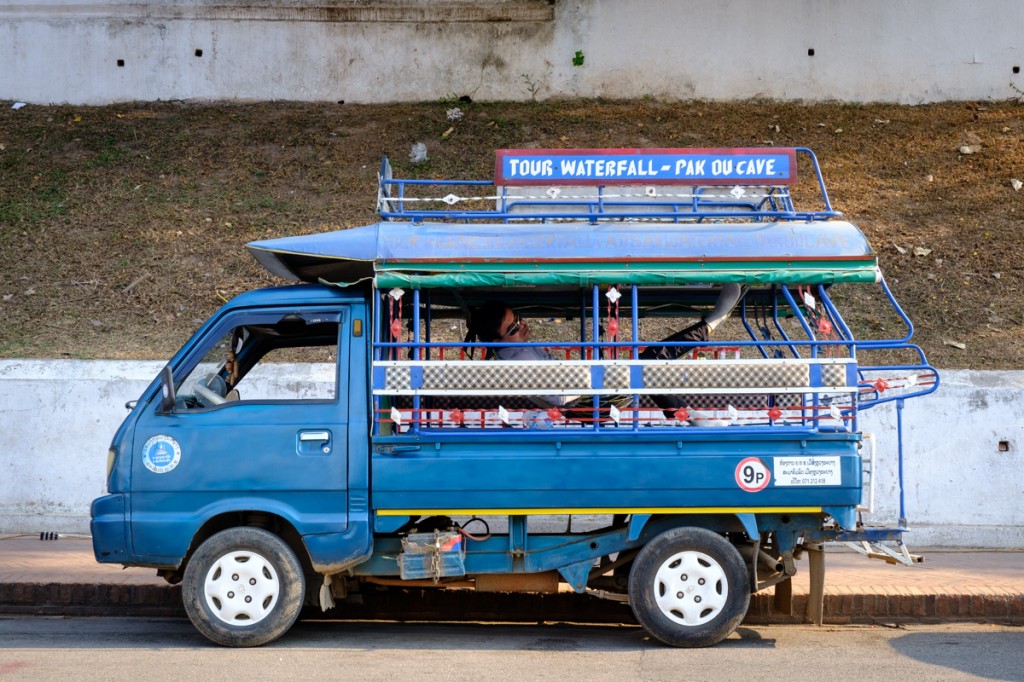 Quite a few tuk tuk or small van drivers could be seen sleeping in the back of their vehicles in Luang Prabang which led me to believe that naps are as sacred in Laos as they are in China! 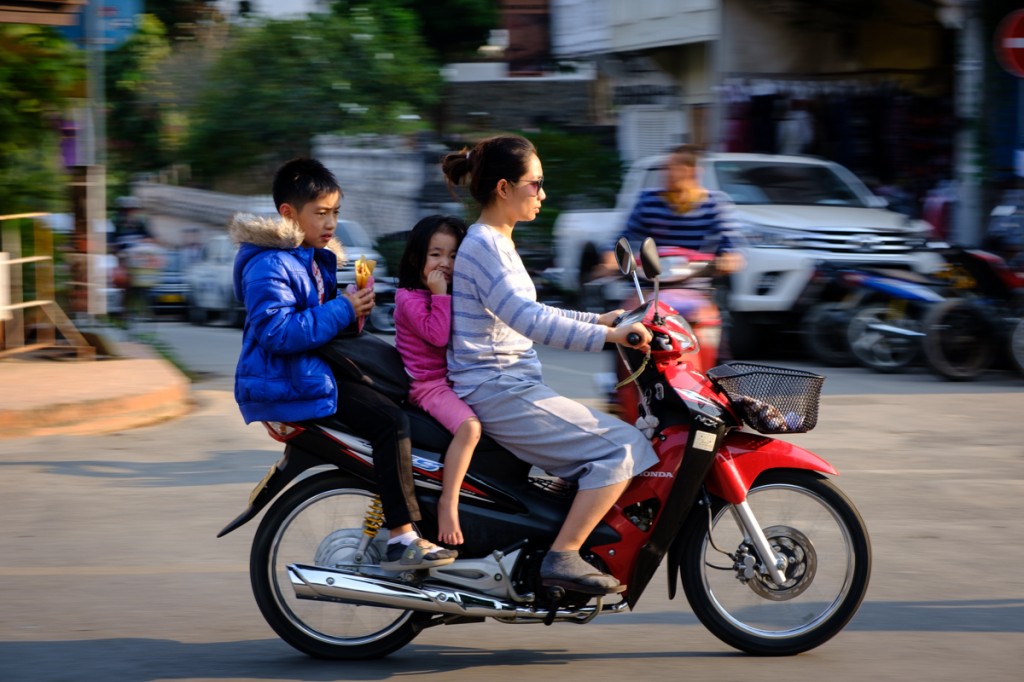 I always love shooting panned photos of two-wheelers, especially in countries where more than one people is commonly found on said vehicle. This one was in the main street in Luang Prabang. I love that the little girl is barefoot, so cute. 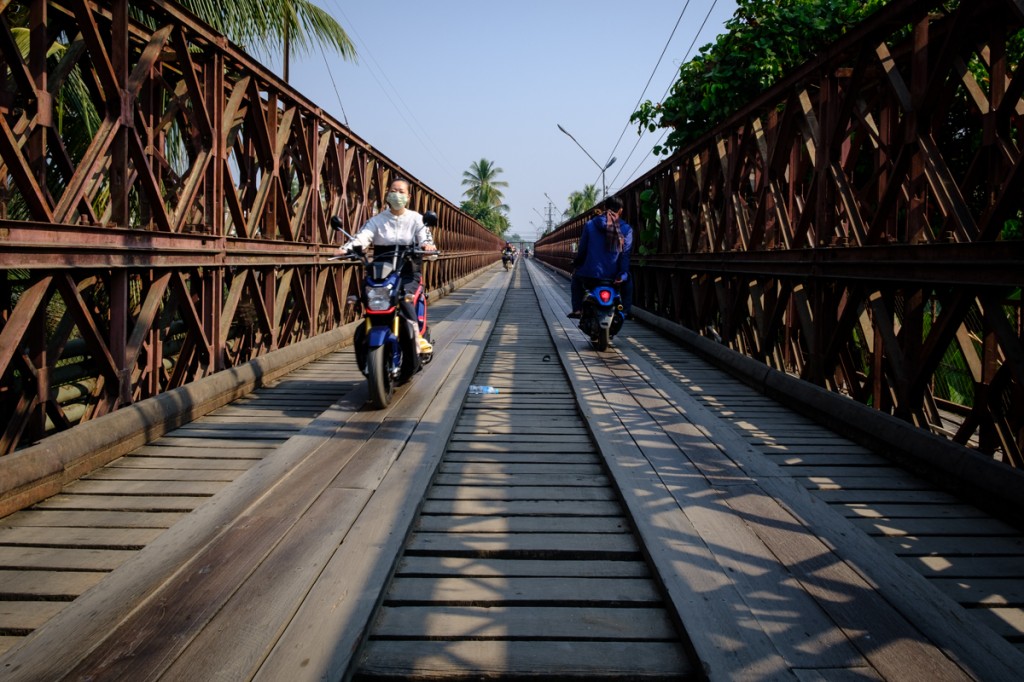 I already mentioned the Eiffel bridge (called the French bridge) in Luang Prabang, crossing the Nam Khan river. The bridge is only suitable for scooters and motorbikes, not for cars. I did some morning shots but they weren’t as interesting as the afternoon shots that had the lattice shadows more prominent. 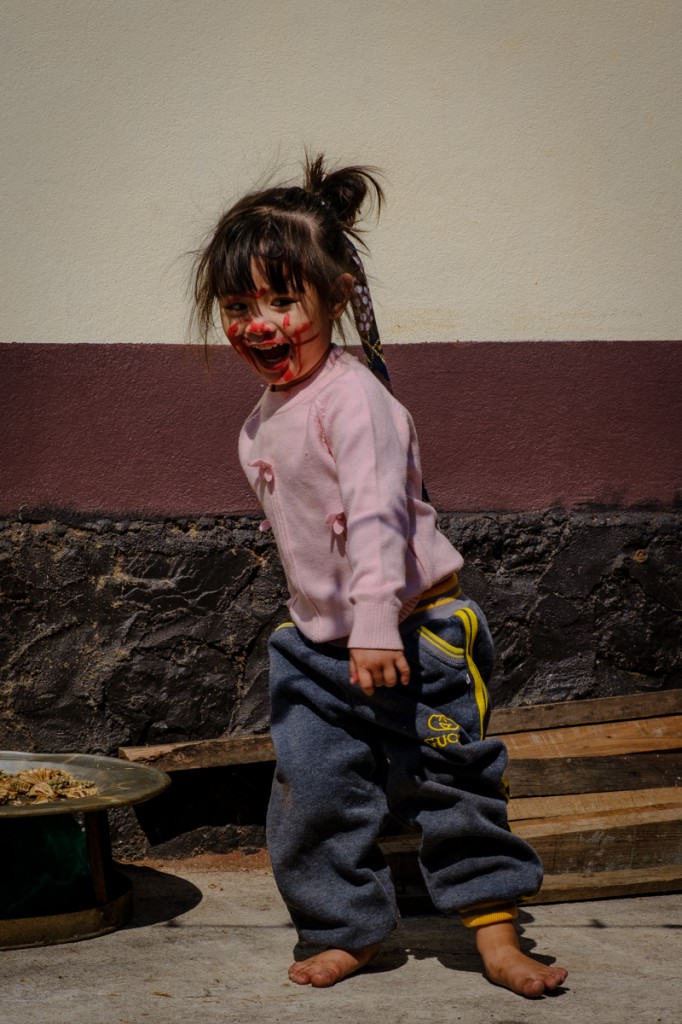 While exploring the back alleys on the hill at the center of Luang Prabang we stumbled upon this little girl. At first we couldn’t figure out what she had on her face until we saw that her mother’s shop seemed to be selling cosmetics. She followed us around and danced with Madeleine for a while. She was just so cute… 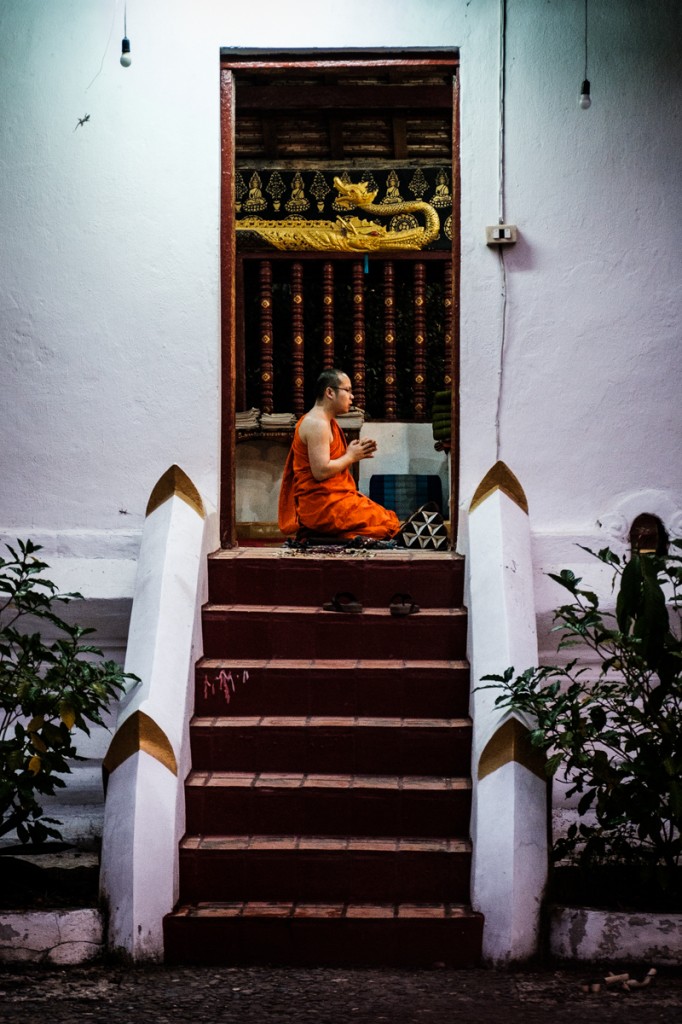 The hours leading to dusk in Luang Prabang are fascinating as monks gather towards the city’s temples for evening prayers. I liked how this particular monk was framed by the side door of the house he was praying in. 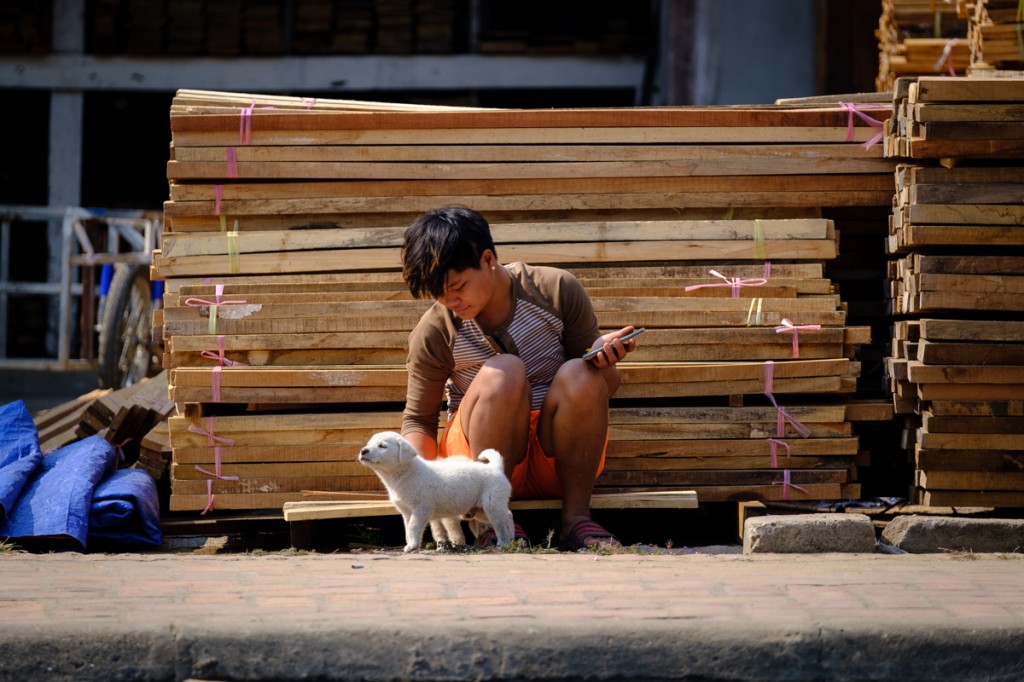 One afternoon in the Luang Praband heat I did something I rarely do (but maybe should do more often): it took some street shots with the zoom lens. In photography circles many will tell you that street is in your face 35mm or nothing. This shot was shot at 210mm. But I like it a lot, the compression from the zoom lens creates nice detachment, and the scene was quite cute… 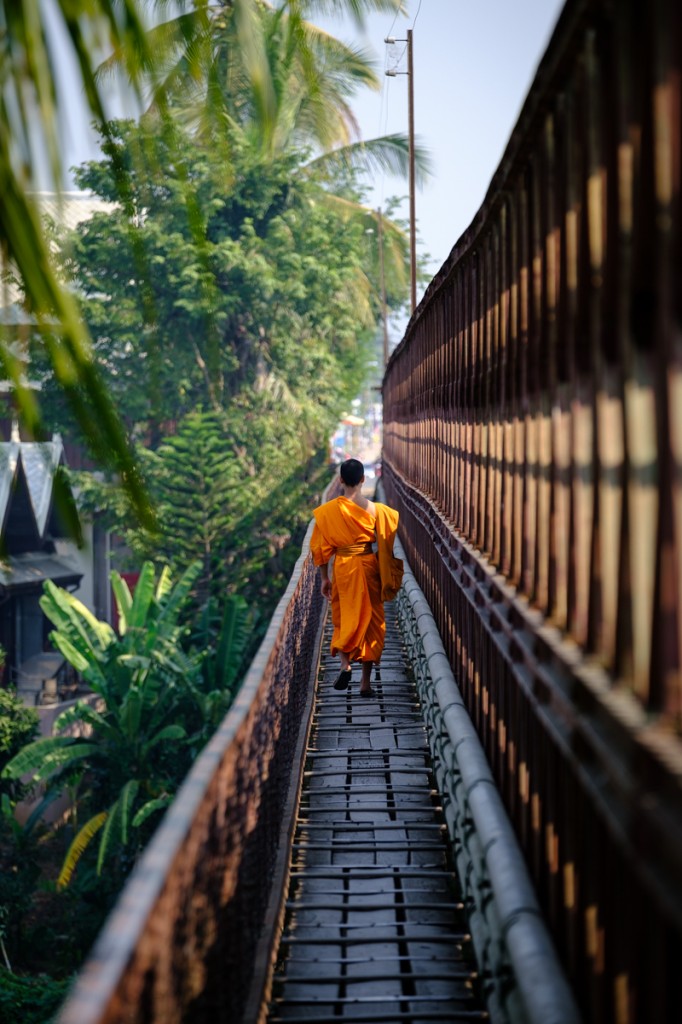 *Monk on the Bridge*
Fuji XT3

There’s an old Eiffel style bridge that crosses the Nam Khan river in Luang Prabang. Appropriately, the locals call it the old French bridge. The road is for two-wheelers only, and there’s a rickety wooden platform attached to the side of the bridge for pedestrians. I managed to dodge the mopeds to take this shot that I quite like.

Last summer I did a bit of mad traveling going from Bordeaux to Paris to Mâcon to Paris again, to Vienna to Lyon to Marseille to Bordeaux to London/Oxford and back to Bordeaux, most of it for work and in the space of two weeks. It was too much. When I arrived in Oxford it was brutally hot, very unusually so for Britain, but very clear as well. Just outside the train station, I saw this row of beautiful old British houses, took out the camera, and voila. 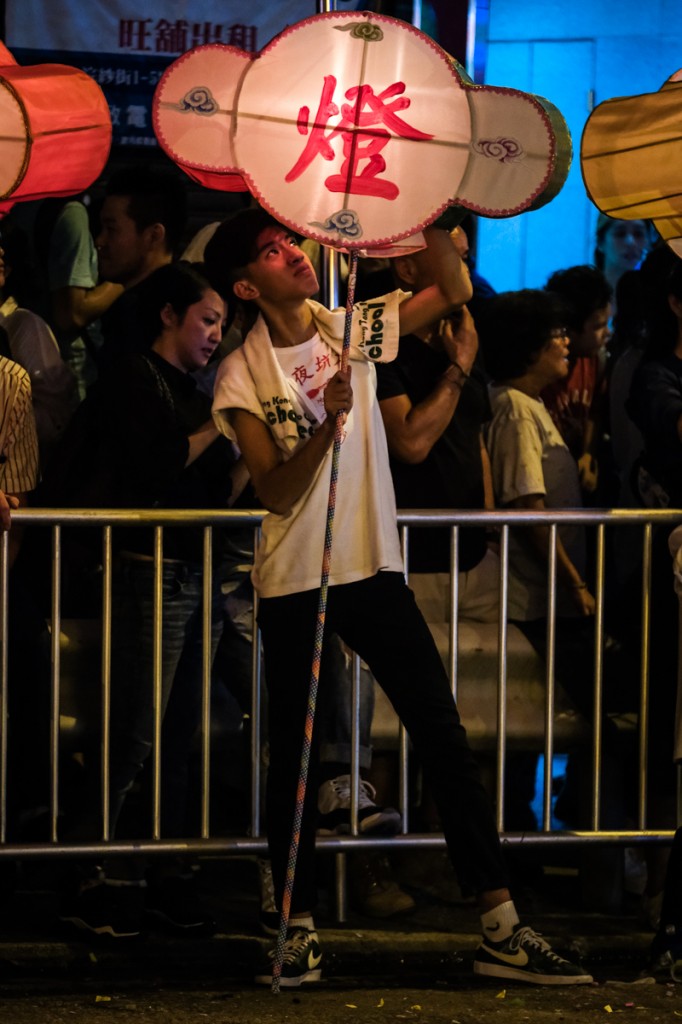 I took a lot of portraits of lantern bearers. I was looking for interesting subjects, but also interesting moments. Here, I liked how the lantern light was directly lighting the young man’s face. Of and yes, the title is a bit of a nod to an old, old song… 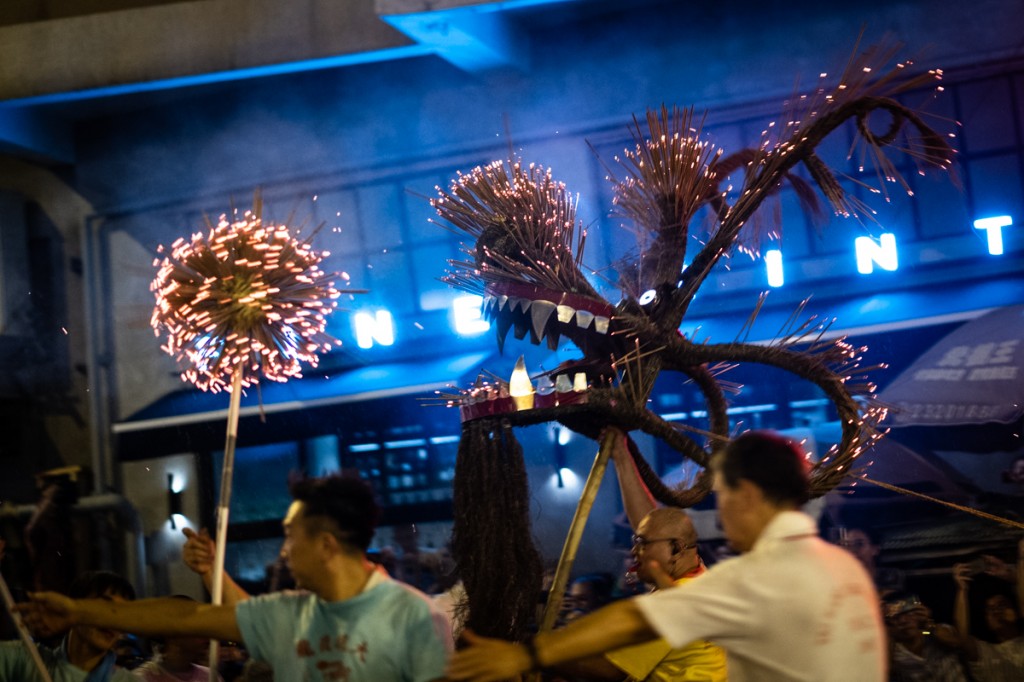 Getting a good shot of the Dragon’s head is devilishly hard. Since it’s made of rope with only the teeth and eyelamps to actually understand what it is, you need the right angle. Also, it’s nighttime, there’s incense smoke everywhere, and it’s constantly in movement. So I was quite pleased with this shot, and quite thankful I took my f/1.2 lens with me (this was shot at 1.4). The rest of the shot is blurred, but hey, you have to imagine that everything is in motion!