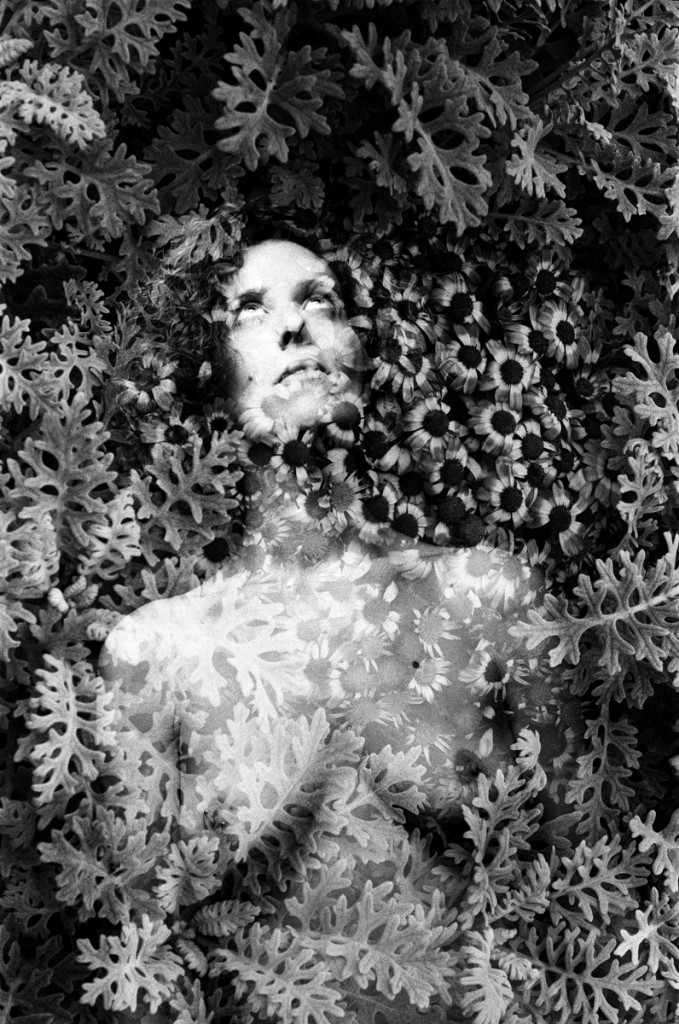 With this double exposure technique, I rather if ever know exactly (or even approximately) how a photo will come out. When I saw the scan of this particular shot of Pauline, something nagged at me, a distant memory that I finally reconnected today. It makes me think in a weird way of an old painting I saw in the Louvre and used to love when I was a angsty teenarge. It’s Delaroche’s La Jeune Martyre (The Young Martyr). There is a similar sadness here, I think, although in this case Pauline is not floating over water but over a mix of ferns and flowers. 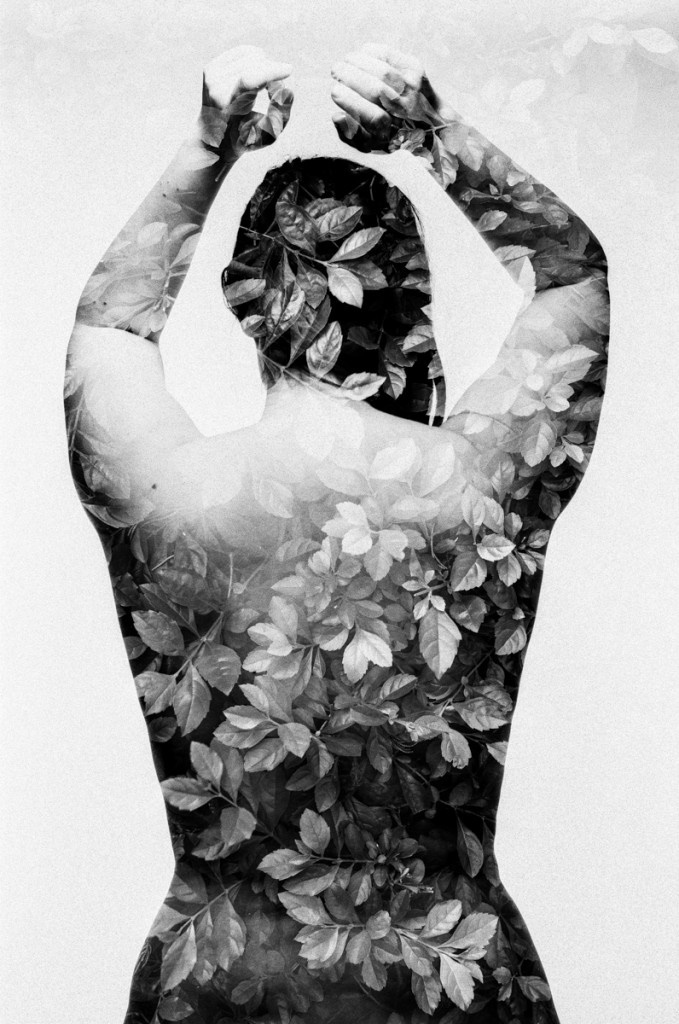 I really like this photo of Amélie’s back… but it was not at all what I was going for, due to my own stupidity. I was very keen to try RPX25 in this project, it’s a film with virtually no grain and with studio lights I thought that the low sensitivity would not be an issue. It turns out it was, kind of, in that blowing the background became a challenge with the lights maxed out. But that’s not where my stupidity came in. When I shoot the textures they are shot at -1 stop. In order to do that I enter the ISO manually at double the nominal value. On the XPAN though, once you’re entered ISO manually it doesn’t reset to Auto once the roll is finished (which would be intelligent, really…) Since the last texture I shot was a Pan F the camera was manually set to ISO 100. And I only noticed on the 5th roll because the 1st roll I shot was Rollei 100… Anyway, most of the other rolls were in the 100-160 ISO range so it wasn’t so bad. But this RPX 25 was shot 2 stops underexposed instead of nominal and the texture was shot at only 1 stop underexposed as I normally do. This is what the texture is so present in the bottom of the frame where the light drops of. To be honest I’m surprised that the top of the portrait came out so well. And thank god RPX25 is virtually grainless: the result is a happy accident! 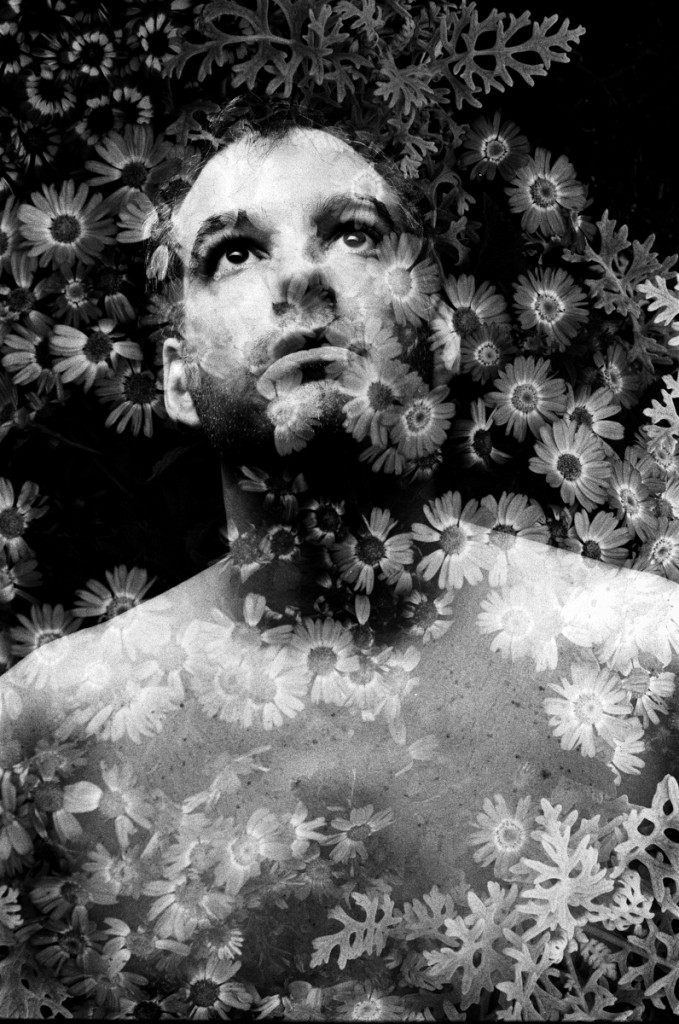 This mix of small round flowers and a fern like leaf texture is both chaotic and structured at the same time, and it conveys something whimsical, indeed faerie like. Hence the title for this one. 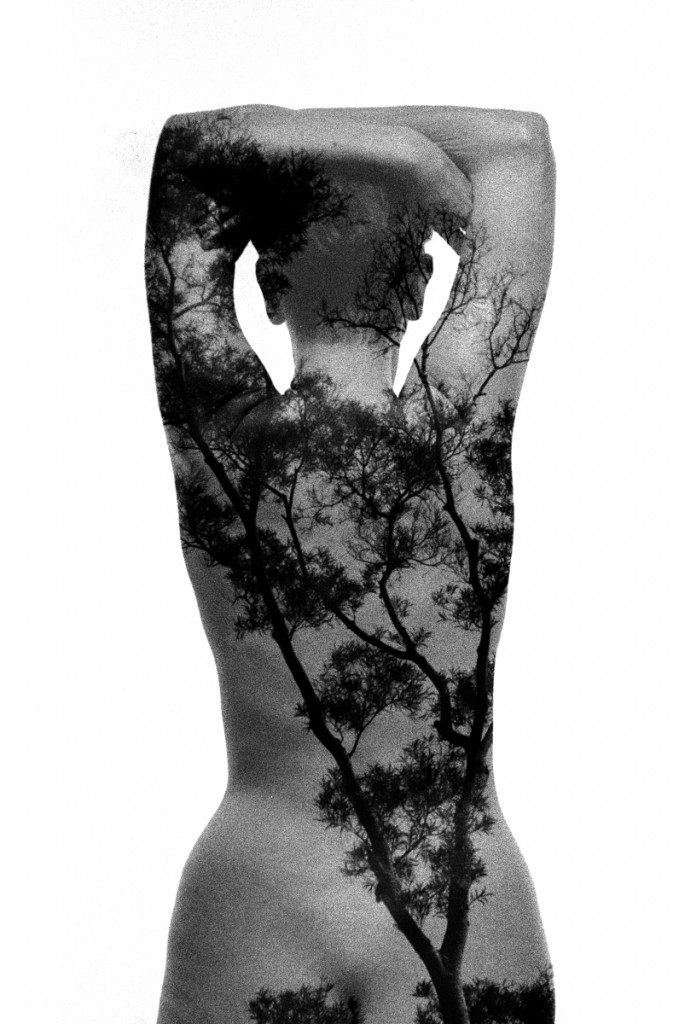 One thing I was keen to explore in this new series of photos was using not so much a texture but a tree background. And it clearly works well. I had seen similar work in some of Harry Calahan’s photos, and I wanted to try it. I really like the results although for some reason that film turned out super grainy. Still, that gives the picture an old style look that I quite like. 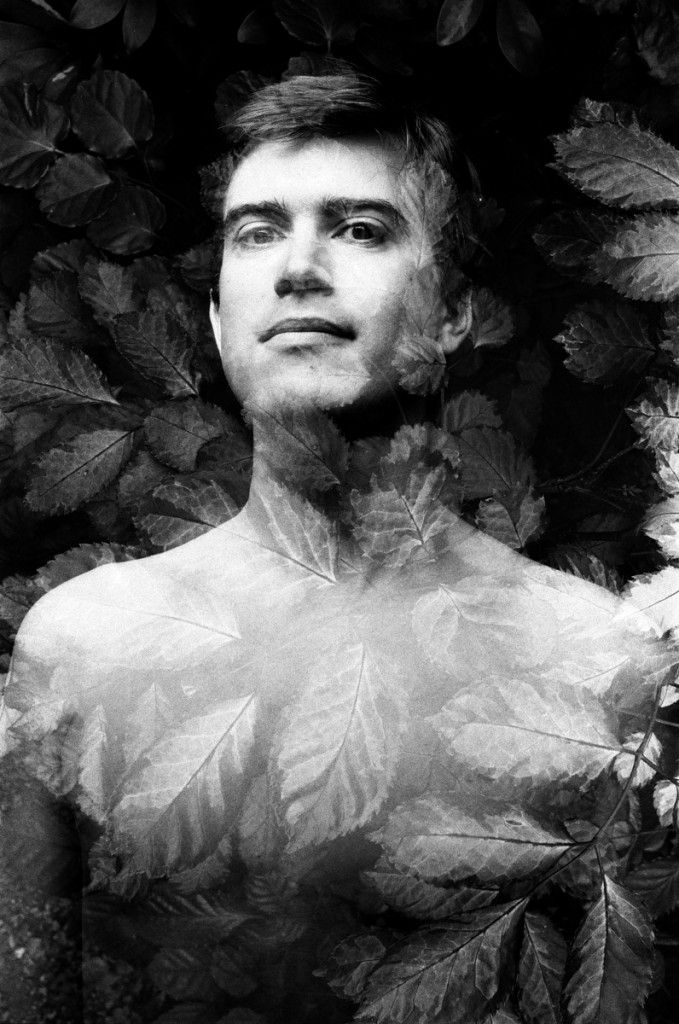 The aim of the dark background experiment in the latest series of studio sessions was to see if I could get the (well-lit) subject to emerge seemlessly and gradually from the texture. Nowhere is this better exemplified than in this shot I think. In others, the light was too hard for a real gradual appearance but here it totally works. This informs my lighting schemes for future studio sessions, as well as deliver a wonderful portrait. 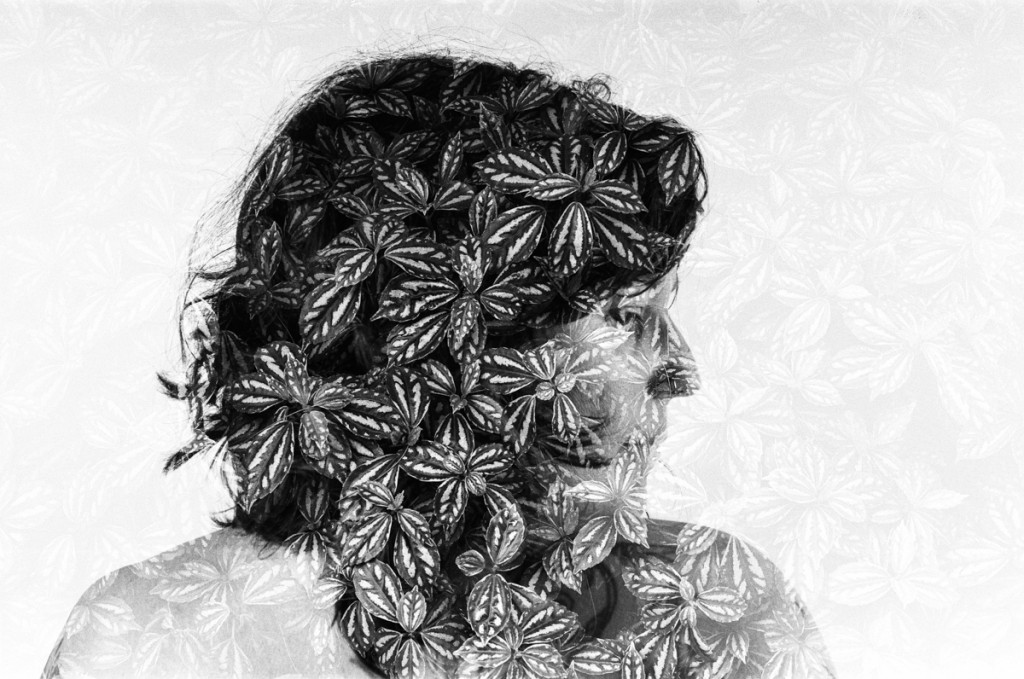 In this third wave of shoots for the Human Nature project I have started tracking the species of plants that I use for texture. I particularly love this one, Pilea Cadierei more commonly known as the Aluminium Plant. I love the contrast between the dark green of the leaves and the white in the center. This is also an example of a new lighting set up with two lateral lights which results in most of the texture appearing in the center of the subject. 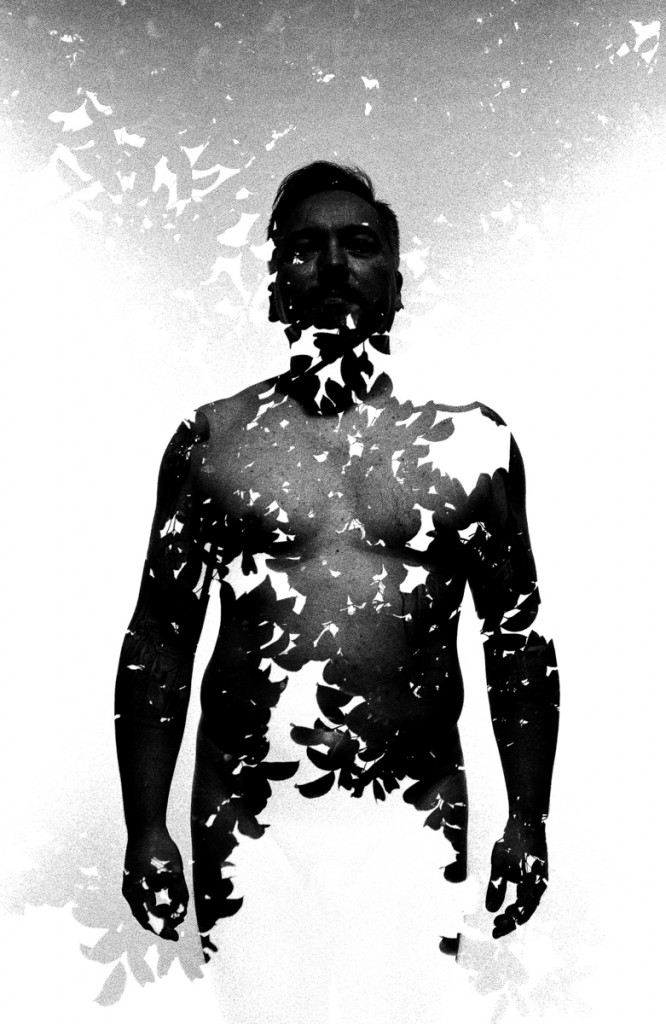 This shot could best be described as a failed attempt that yielded something interesting nonetheless. It’s not a « pretty » shot, but it’s moody and evocative. What I was aiming for was shooting an inverted tree top at the bottom of the texture frame so that the exposure on the body would be kind of normal and the shape of the body would taper out into the shape of the tree. I don’t know how I messed up my framing, but clearly I did. That said, the disaggregation of the shape by the light peaking through the leaves is a very cool effect that I definitely need to try again. 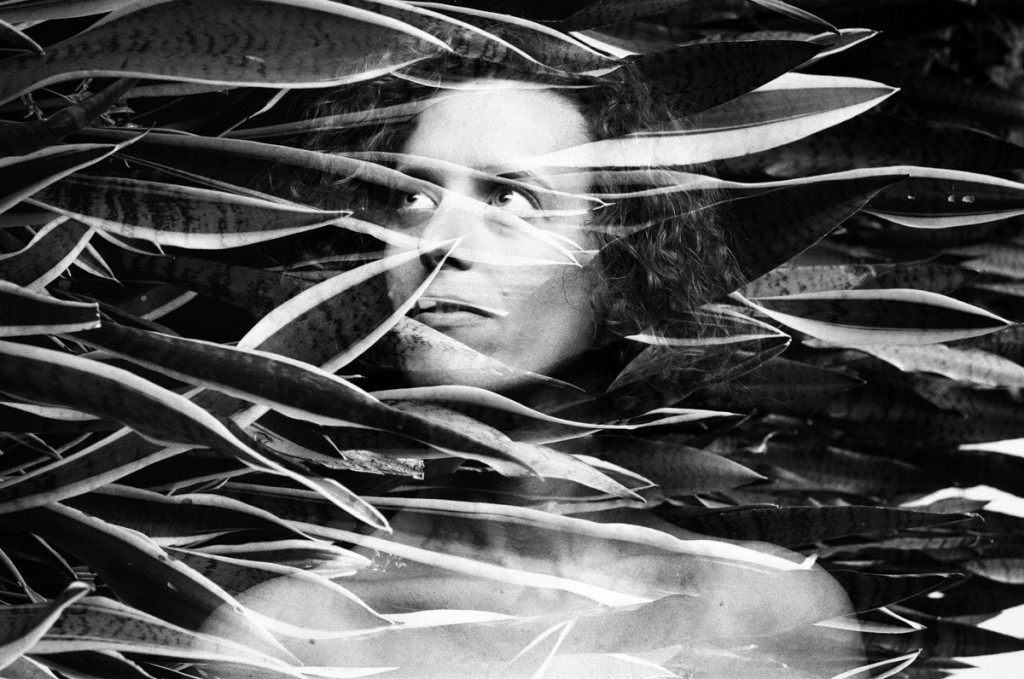 One of the things I thought I was careful about was writing down when the textures were directional. This one was marked as horizontal. But happy accidents mean I quite like this one. The direction of the look goes against the direction of the leaves, creating an interesting dynamic. 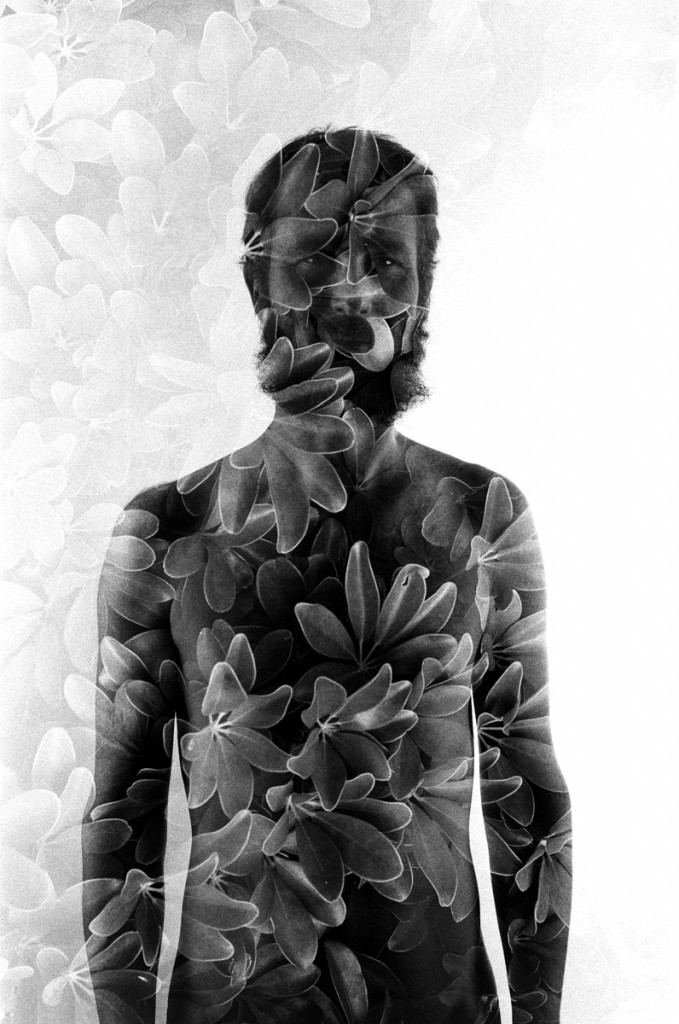 I wanted to try new lighting schemes for this third studio session, including this one: instead of having a front or front/side light, I went with two lateral lights. The idea was to have the sides well-lit and defined (outlining the silhouettes) and the center of the body in the dark, heavily textured. It’s a partial success as the lighting of the sides needs probably more precision than what I applied to the shot, but I like the overall look anyway, a lot gloomier and creepier than my previous lighting setups. 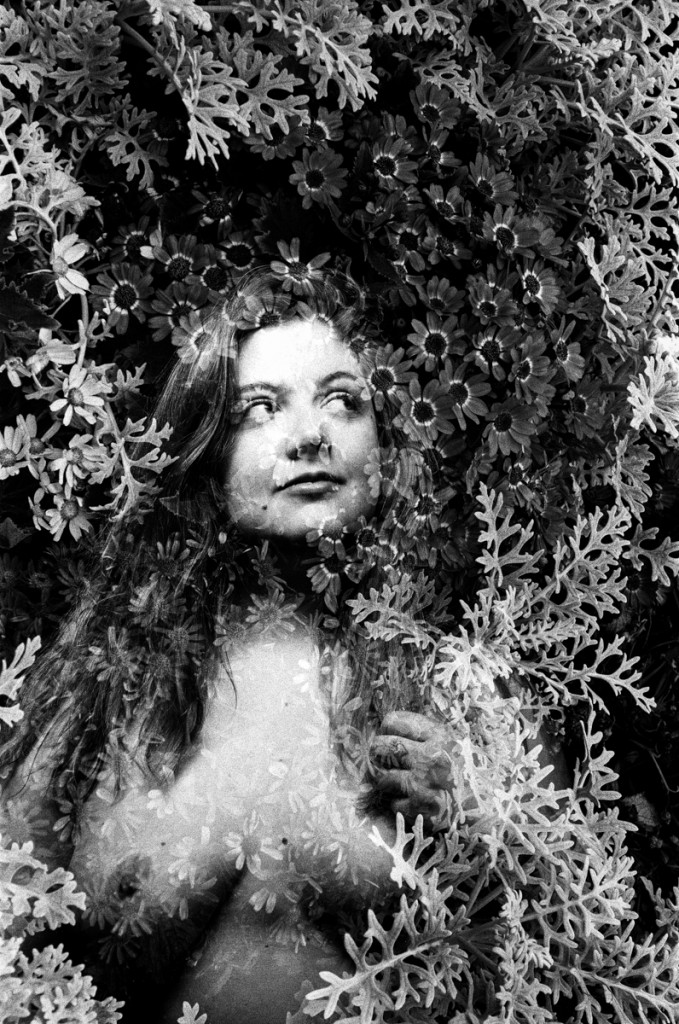 So a few weeks ago, before the world went completely mad, I was lucky enough to run two studio sessions with wonderful models to test some new concepts in my Human Nature project. One of the key proof points was « can I make some interesting double exposure blends with dark backgrounds ». It was pointed out to me by a friend here that not everyone loves the stark negative space that is a byproduct of the first series of shots on white backgrounds. This photos (and others) prove (I think) that the concept has legs.