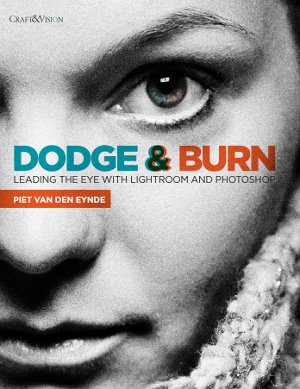 Craft & Vision is a photography e-book publishing label launched and maintained by David Duchemin. C&V has over 40 titles available, all priced at $5 and all aiming to teach photographers to be better at photography. I’ve bought a fair number of these over the last few months and thought I’d start reviewing them. The first one I bought was Piet Van den Eynde’s The Power of Black & White and while it’s been too long for me to competently review it today (I’ll have to read it again first) I was very happy with the value for money and went to buy some more!

The book I want to talk about today is another of Piet’s releases, Dodge & Burn.

When editing concert photographs, I tend to spend a lot of time with dodging & burning, if only because there are often distracting on-stage elements (microphone stands, water bottles, towels) that I want to be as inconspicuous as possible. Since I don’t own Photoshop and wouldn’t know how to use it if I did, cloning them out is rarely an option (the tools to do so in Lightroom are rudimentary at best). So while I consider myself competent on the matter, I wanted to read what Piet had to say about it.

What I found in Dodge & Burn was exactly what I was after… and then some. A lot of photography tuition books are little more than rehashes of the “photo theory” that everyone has heard of over and over again. I like my books to be chock full of practical advice, even if they cover ground I think I know already: if I don’t learn something entirely new, I can learn of a different approach to something I already do or have confirmation that I’m taking the right approach. Of course, it’s never that black & white (no pun intended) but you get the idea.

Dodge & Burn starts with Piet explaining the terms and their rich, pre-digital history in photography. He then quickly covers the compositional justifications for dodging and burning, when it makes sense and why. The meat of the book is on the how, and it’s focused on Lightroom (or Adobe Camera Raw) and Photoshop. If you use neither of these tools, then the value of the book is probably limited as you’d have to figure out how what Piet shows how to do could be done in whatever software you’re using.

Having described his proposed workflow, Piet then examines in a systematic way the various tools at the photographer’s disposal to dodge and burn. He starts with global picture settings and how they can have local impact, then examines the various local adjustments tools in Lightroom (essentially the graduated filter tool and the adjustment brush). Case studies are proposed throughout to not only see the theory in action but allow readers to emulate the theory with sample pictures that are delivered with the book.

After explaining how to use the tools available in Lightroom, Piet then examines a few external editor options, namely Viveza, Silver Efex Pro and Snapseed, all from Nik Software. He looks specifically at the options and toolkits in these packages that are directly relevant for dodging and burning.

Finally, having looked at all the non-destructive editing options available in Lightroom (although external editors aren’t exactly non-destructive), Piet details these cases when you might still need to work in Photoshop (assuming you use Lightroom and Photoshop) and what tools you might use to do effective Dodging & Burning there. He even introduces a plugin of his own design called EasyDodge which facilitates dodging and burning in Photoshop. The plugin is available as part of the purchase of the $10 full package (as opposed to the $5 e-book alone).

As I said above, Dodge & Burn is exactly what I expect from a photography technique book. It’s concrete and actionable, well written and fully illustrated. Incidentally (and that’s important to me) Piet Van den Eynde offers a lot of his own photography as illustrations to the points he’s making, but his choice of photography is spot on: the pictures are great, but they’re not out of this world. In other words, you don’t stare at a picture and think “yeah right, like I’m ever gonna shoot something like that”. That’s a very important aspect of tuition books and one that is not often executed on properly.

For $5, there’s honestly not much more you can ever want from a book like this. The value for money is astounding. In fact, even though I don’t own or use Photoshop, I bought the full package, because even at $10 it’s still a killer…