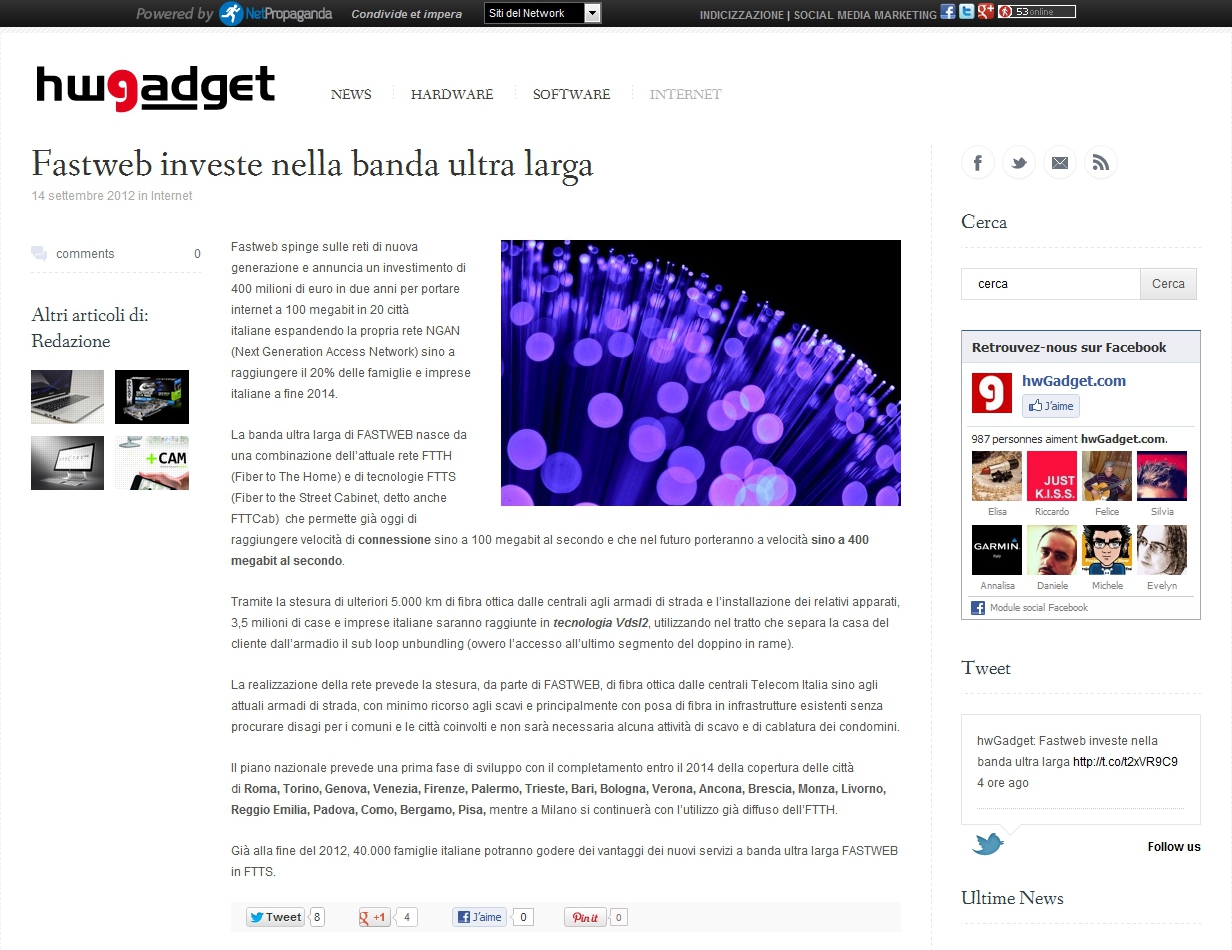 Last Friday, a little  before I left work, I was scanning work related tweets and I see a new link about Fastweb’s recent announcement in the realm of Optic Fiber. That’s the area I work in, you see.

Coincidentally, I have also been doing some Optic Fiber photography. It’s an area I have been experimenting in on my spare time and I’ve managed to produce some interesting results (if I say so myself). Some of these photos I uploaded to 500px and on this site. They are copyrighted to me and not Creative Commons (if only because 500px doesn’t have the option to list a photo as CC yet).

Imagine my surprise therefore, when I click on the link I had spotted in twitter, to an Italian publication I’ve never heard of called hwgadget (twitter handle @NetPropaganda) and find this picture as an illustration to their article. As you can see from the attached image, there is no attribution, no link back, nothing. They act as if they owned it.

Now despite the fact that these pictures were not CC, I probably would have let things slide if there had been a link back to my website. It would at least show some acknowledgement on the part of the publication that they didn’t own the picture and weren’t downright stealing it.

But I was a little miffed, to tell the truth. I know this happens a million times every day on the internet, but that doesn’t make it right. Furthermore, hwgadget is clearly a professionally made publication. I don’t know if they make a lot of money or not, but they’re clearly not a blog. So I’m not, at this point in time, feeling lenient.

Needless to say, I had no response from hwgadget or @NetPropaganda. However, a couple of hours later, I clicked on the link again, and the photo was changed. The new photo also has no attribution, so it’s not CC. Wondering who they ripped off for that one. Or did they at least purchase cheap stock?

The thing, I think, that irritates me the most about these things is that quite often these « thefts » are perpetrated by people who produce content themselves. I wonder how hwgadget would have reacted if I took their article on Fastweb, translated it, and posted it as my own on my blog Fiberevolution. I suspect they would be very annoyed – to say the least – and would probably send me a stiff email or even a lawyer’s notice. So why do they do it?

I’m not losing sleep over this, and my wife even told me that in a way the fact they wanted to use my photo was flattering. Still, for anyone who would want to use a picture of mine in a similar way, please contact me! Let’s be civil about this, there’s no need to act all hush hush and disrespect my work!