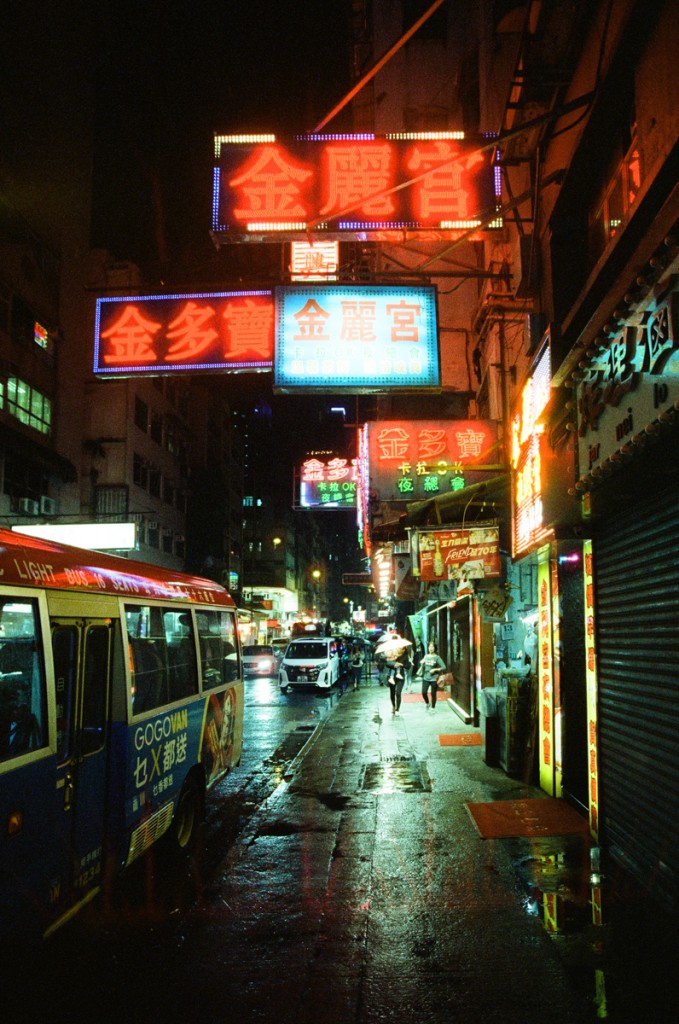 My first contact with Cinestill 800T was thanks to a nighttime photowalk in Mong Kok organised by Camera Film Photo in collaboration with Take Kayo (@bigheadtaco on Instagram). I shot two rolls on my Canon A2 during that outing, and really loved the results. The neon lights were magnified by the tungsten rendering and for once the light drizzle was a boon, creating tons of reflections.

This is what Cinestill’s website says about this stock :

CineStill 800Tungsten is a unique film for still photographers. This 800 speed tungsten balanced color negative film is prepared from the same motion picture film stock used by top cinematographers around the world. This film is designed for difficult low light tungsten situations and may be used in many different lighting situations to achieve a variety of looks.

I really loved the cinematic feel conveyed by Cinestill and those haloes around the light sources really gave the photos a Blade Runner style look. Take recommended we shoot it at 500 ISO to trick out lightmeters into not overestimating the importance of the neon lights, and it worked really well.

A few weeks later, I had to travel to Bangkok for work, and on the recommendations of my fried Jules Le Moal (@jules_le_moal on Instagram) decided to check out Yaowarat, the chinese quarter which has a night market for street food. I had packed Cinestill and shot it in the same conditions as on the previous outing. Again, the film performed superbly. The lighting conditions were very different, but I was able to shoot some really close up street shots of food vendors that I really like.

I was however also curious to see how the stock would function in the daytime. During our winter break we headed out for Luang Prabang in Laos, and I used 800T on a late afternoon. It was slightly overcast day, and the tones came out more subdued than I expected but quite pleasing. A more « natural » look than duringthe night, I suppose, but quite convincing.

Finally, earlier this year I went to Shanghai for work. I knew the weather was going to be lousy (and pollution would likely be high) and I was right (on both counts). On my spare time, I ended up going to a couple of places I loved or longed for from my time living in Shanghai. I started with a cricket market, which was inside and badly lit. The « nighttime properties » of Cinestill 800T was partially on display.

My final stop was the Jade Buddha temple, a place I’d only been to once, on my very first week in Shanghai. The weather was atrocious, but I managed to capture some nice golden hues in the statues thanks to Cinestill. I probably should have exposed not at nominal but a little underexposed, because again, while not nighttime conditions this looked a bit like bright spots of lights in plenty of shadows, tricking the meter into thinking there was more light than there actually was. Still, got some interesting shots.

In a nutshell, Cinestill 800T has become my go to film not only for nighttime urban photography, but for any situation when high sensitivity is required, even in the daytime. I have never been happy with the results from Fuji’s 800 or 1600 films, the grain is just too pronounced for my tastes while Cinestill 800T has surprisingly fine grain and it really doesn’t detract from picture quality in my opinion. The tungsten colour palette is quite pleasant, and it gives the shots a personality that I really like. I cannot compare to Portra 800 which I’ve never tried.