(This is the second part of my Coromandel Travelogue. You can find Part 1 here.)

Having taken a few shots of Hahei Beach, including this panorama,

I booked a room at The Church, and had a quick but tasty chowder at the Hahei Beach Café; then it was time for my trek to Cathedral Cove. The Lonely Planet described the path to Cathedral Cove as follows: « At the car park, 1km North of Hahei, the signs suggest that the walk will take 45 minutes, but anyone who’s not on a ventilator will do it in 30. » I didn’t expect it to be hard. I was wrong. The positive side of my lack of fitness was that I was often inclined to stop and take photos. The view from up on the cliffs was quite stunning… 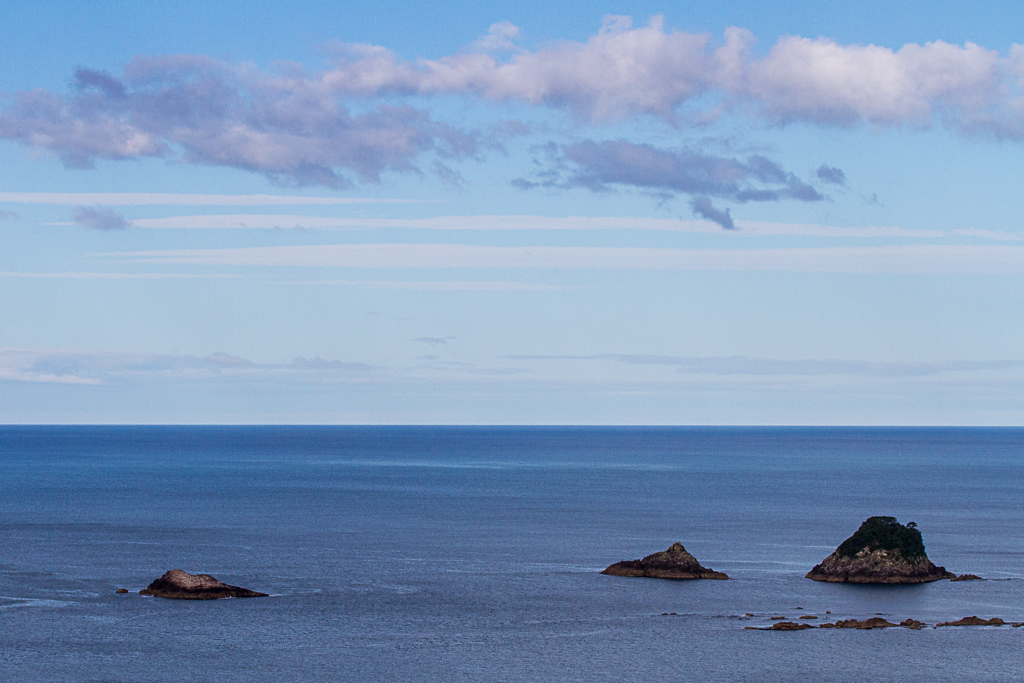 I was particularly taken by these little rock islands with dense vegetation on top. 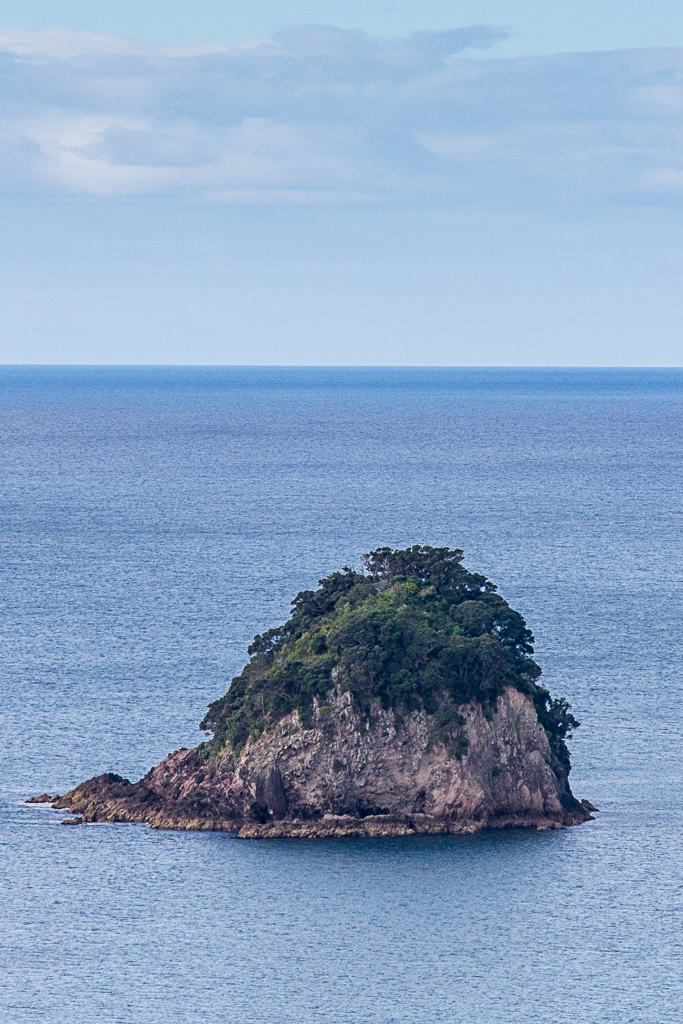 It was still quite cloudy, but the sun was coming through more often than not, creating some dramatic scenery that I couldn’t quite capture, although I did my best… 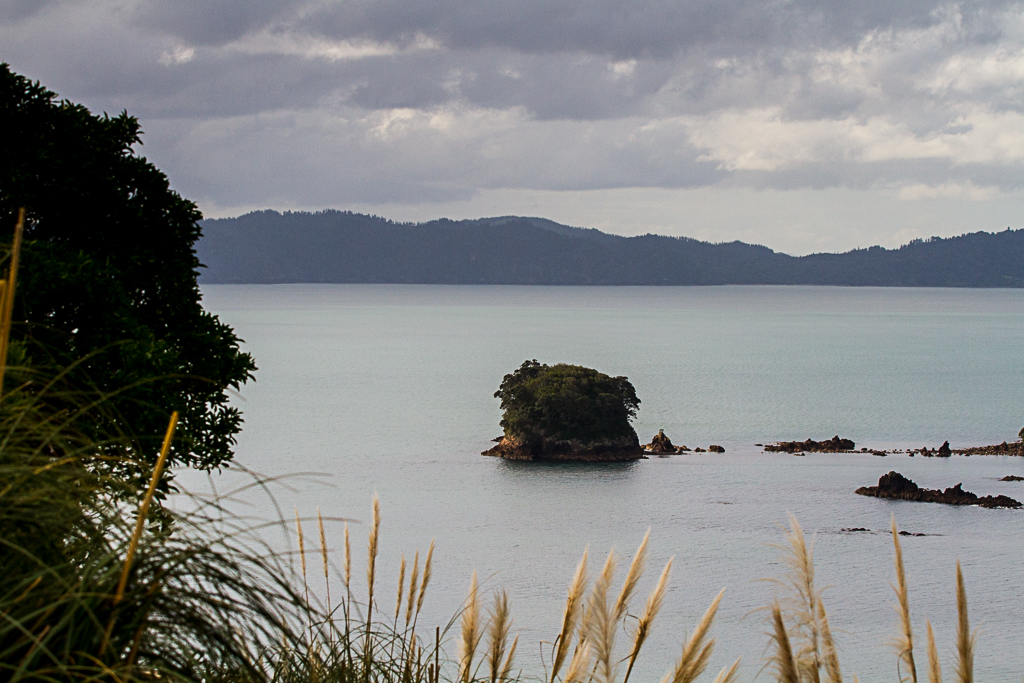 My favourite wiew from up there was that of Motueka and Poikeke Islands next to each other with what I assume is the Mercury Islands far on the horizon. 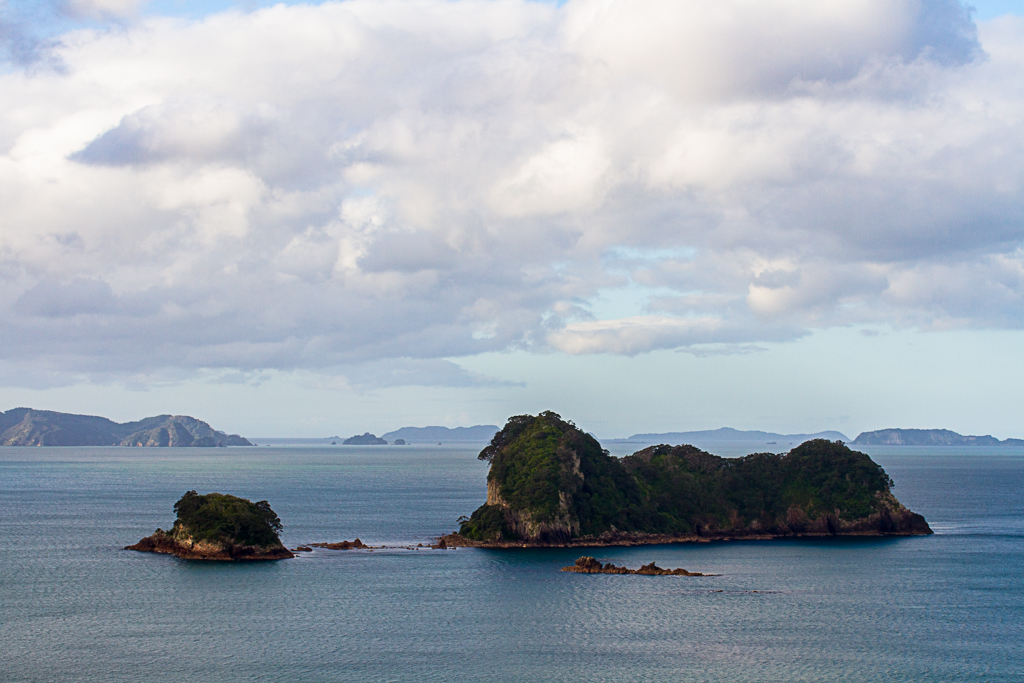 I finally made it to Cathedral Cove, every bit as impressive as I’d been told although to be fair my willingness to wander around was a little stifled by that point. I settled for a few shots from below the arch. The first one is, of course, the classic shot. I wanted the arch to come out though, so I did a five exposure HDR to ensure that it wouldn’t all be drowned in the shadows. 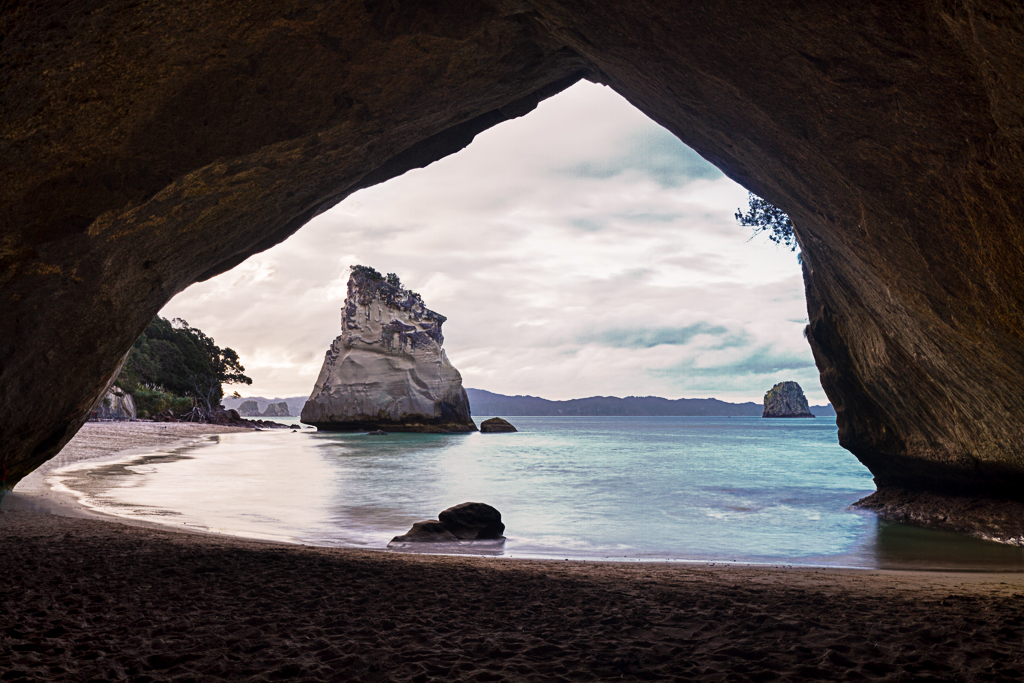 I then got closer to the edge and tried some long exposure shots of Te Hoho Rock I got an interesting take where the sunset colors are just starting to peak (it was around 5 PM). 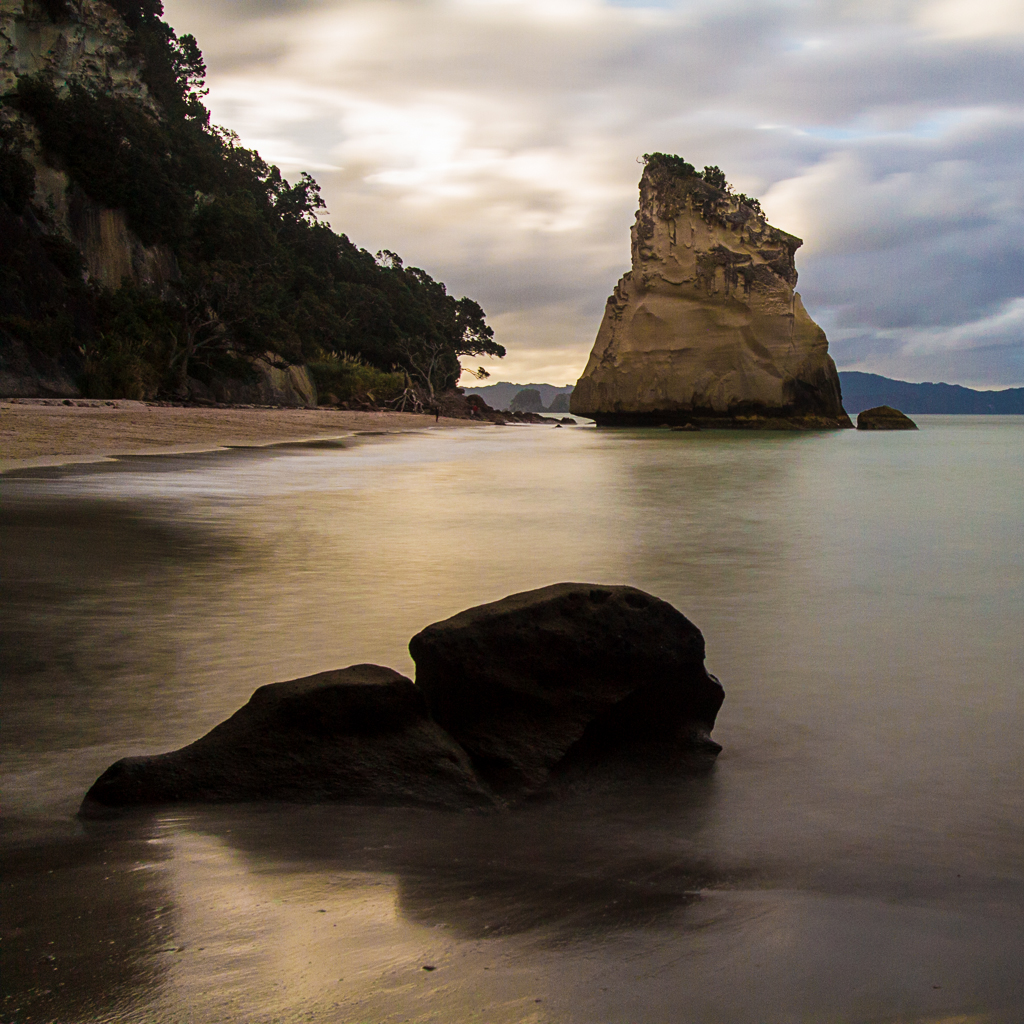 I then decided to attempt a super-long daytime exposure (probably one of the longest I ever tried) at 135s to get a really dreamlike effect. Strangely enough, despite the time it was exposed, there’s still a visible silhouette in the shot! 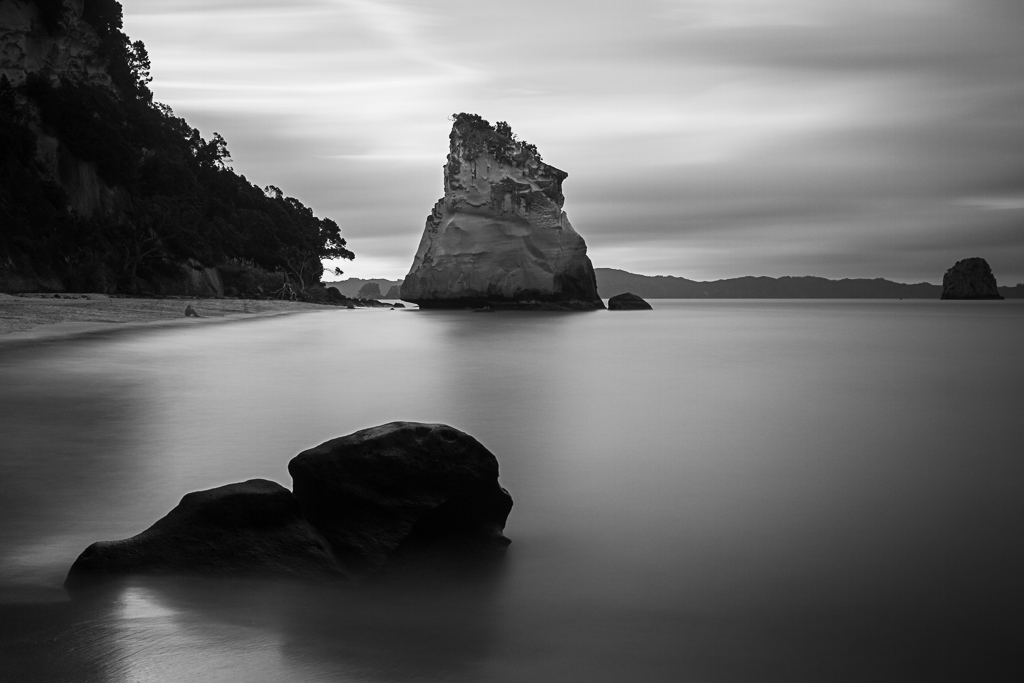 I walked around the beach a little, but I was really tired from the walk and the tripod was weighing on my shoulders, so I decided to start the walk back when I still had a little strength in me. And yes, I do generally have an inhaler with me, so maybe I should have heeded the Lonely Planet a little more…

On the way back I really took my time (as if I had a choice!) and that gave me the opportunity to look at the woods a lot closer. It’s fascinating how different the vegetation can be from similar climates in Europe. I was particularly fascinated by some of the tree roots, and stopped to shoot a particularly impressive one. 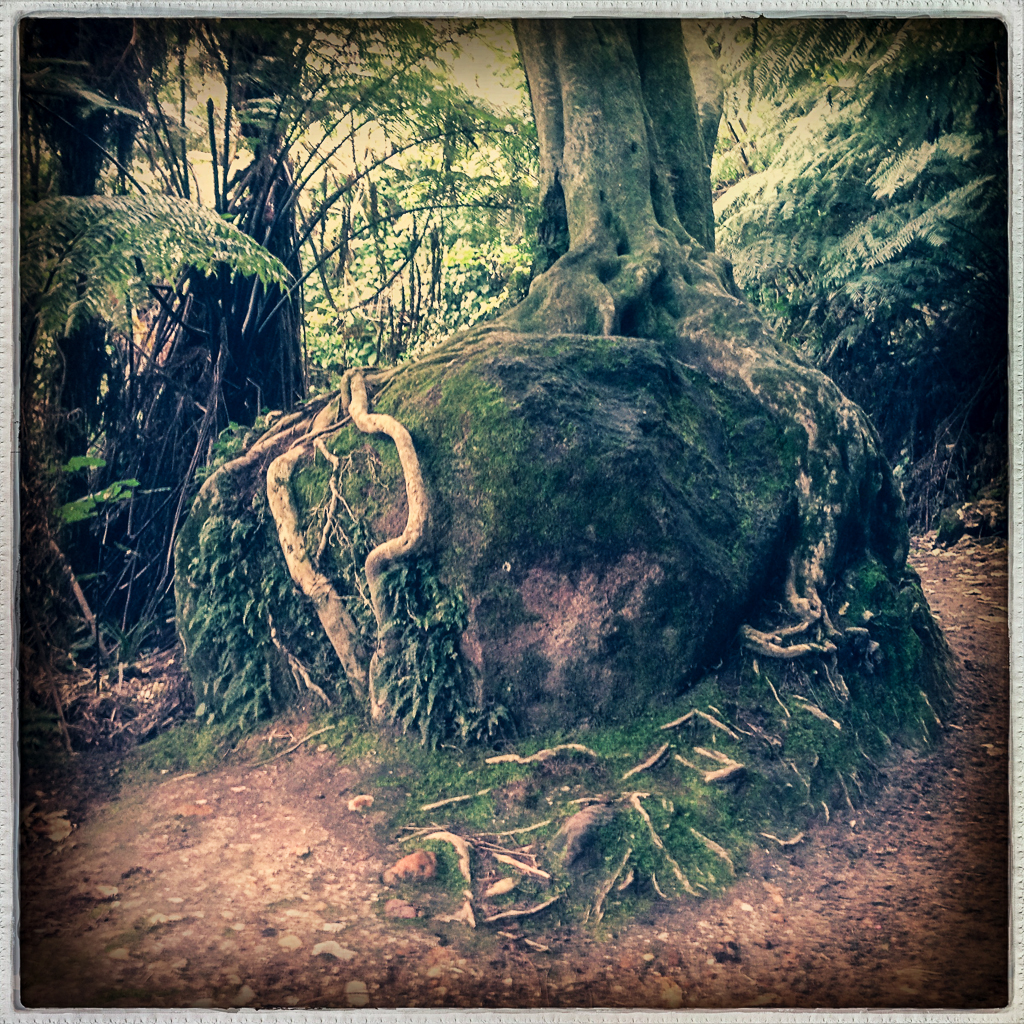 A little bit later, the forest cleared up for a magnificent view of the sea and islands. The sun was low on the horizon and the colors started getting really fantastic. I caught this shot with the iPhone that I really like. There’s a quasi-painting quality to it, it seems to me. 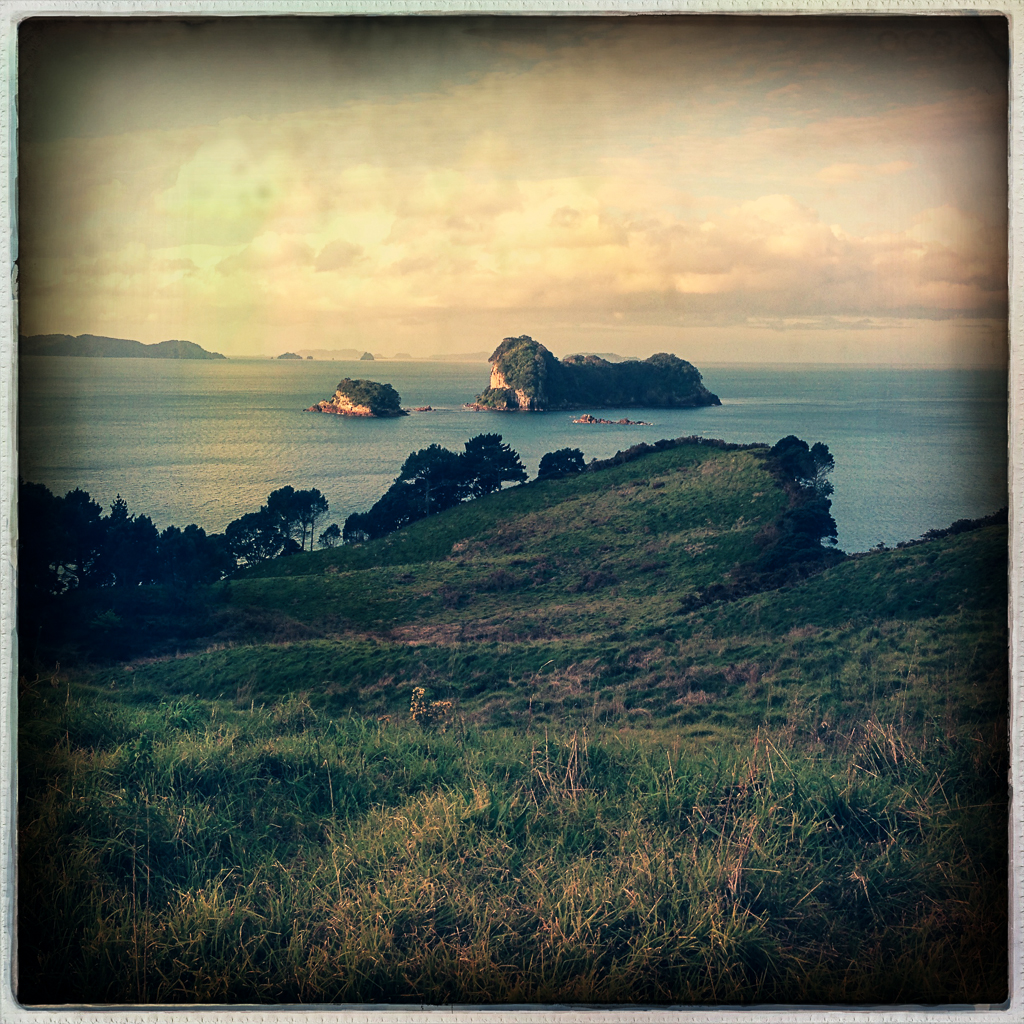 From the same spot I also decided to try and panoramic, which has the strange quality of starting and ending with the path. If you look closely, you can even see the two japanese girls who were sitting on a bench listening to pop music on a smartphone loudspeaker…

On the way back from Cathedral Cove
iPhone 5

I didn’t take the camera out much on the way back, I was just too tired and needed to focus on putting one foot in front of the other, but just as I arrived back at the carpark, the sunlight in the opposite direction started to color the clouds nicely. I probably would have gotten some great shots if I’d waited another half-hour, but I’d had enough for one day. 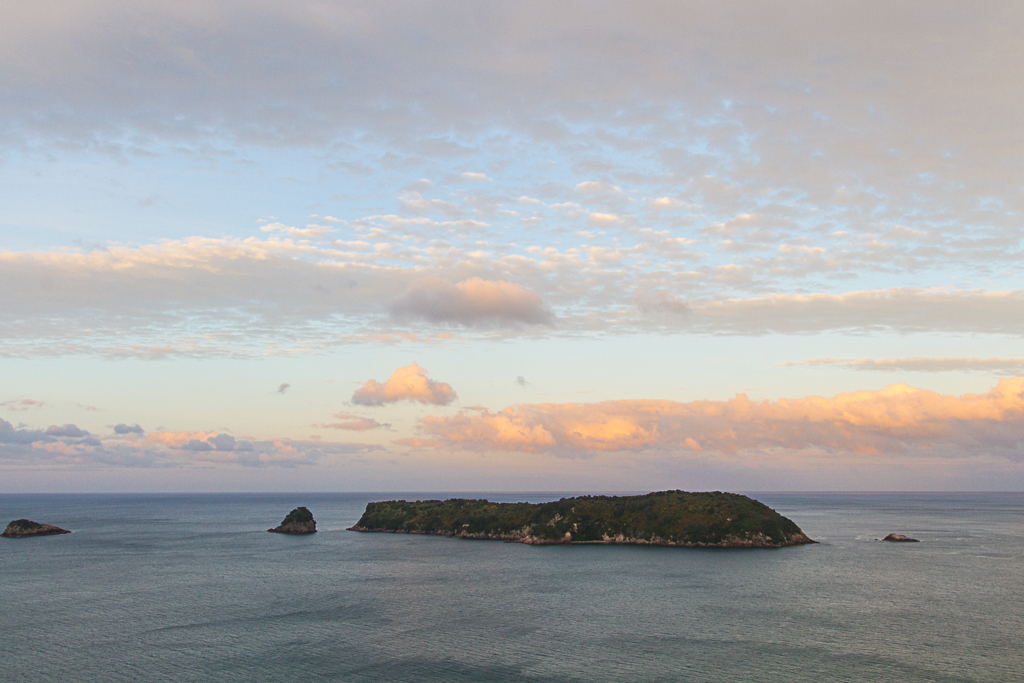 I had originally intended to go back to Cathedral Cove for sunrise the next day, but I now knew I wouldn’t be capable of it physically, especially not in low light. Next time I’m around, now that I know the lay of the land, I’ll plan ahead and do that.